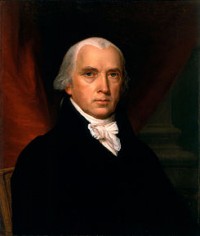 James Madison (1751-1836) was a planter, a scholar, the Father of the Constitution, and the fourth President of the United States. Although Madison was not considered a commanding public speaker, he was one of the most effective delegates at the 1787 Constitutional Convention, thanks to his diligent study and keen analysis of the republic as a form of government. He was a skillful legislator, serving in the Virginia Assembly, the Continental Congress, and the first four Congresses of the United States. Madison was Thomas Jefferson’s Secretary of State before succeeding him to the Presidency. As President, Madison strove to carry out his principles of republican government, even while waging the divisive War of 1812.

While the slight, soft-spoken Madison gained a reputation as shy in public, he was relaxed and charming with those he knew well. Dolley Madison’s cousin Edward Coles, who served as Madison’s secretary, wrote,

In height he was about 5 ft. 6 in., of a small & delicate form; … few men possessed so rich a flow of languages, [or] so great a fund of amusing anecdotes, wh[ich] were made the more interesting from their being well timed & well told. His ordinary manner was simple, modest, bland & unostentatious, retiring from the throng & cautiously refraining from doing or saying anything to make himself conspicuous. This made him appear a little reserve[d] & formal … Under all circumstances he was collected & ever mindful of what was due from him to others, & cautious not to wound the feelings of any one.

Madison‘s friend James Kirke Paulding recalled, “He was a man of wit, relished wit in others, & his small bright blue eyes would twinkle most wickedly, when lighted up by some whimsical conception.”   As writer and friend Margaret Bayard Smith remembered, “his conversation was a stream of history.”