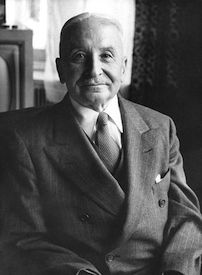 Ludwig von Mises was a philosopher, Austrian School economist, and sociologist. He became a prominent figure in the Austrian School of economic thought and is best known for his work on praxeology, a study of human choice and action.

Mises was born in the city of Lemberg, in Galicia, Austria-Hungary (now L’viv, Ukraine). His family had been elevated to the Austrian nobility in the 19th century, and was involved in building and financing railroads. In 1900, he attended the University of Vienna. In 1906, Mises was awarded his doctorate from the school of law.

Mises started a career as a civil servant in Austria’s financial administration, leaving after a few months to take a trainee position in a Vienna law firm. During that time, Mises began lecturing on economics, and in early 1909, he joined the Vienna Chamber of Commerce and Industry. During World War I, Mises served as a front officer in the Austro-Hungarian artillery and as an economic adviser to the War Department.

Mises was chief economist for the Austrian Chamber of Commerce and was an economic adviser ofAustrian Chancellor Engelbert Dollfuss. In 1934, Mises left Austria for Geneva, Switzerland, where he was a professor at the Graduate Institute of International Studies until 1940.

In 1940 Mises and his wife fled the German advance in Europe and emigrated to New York City. There he became a visiting professor at New York University, a position he held from 1945 until his retirement in 1969.