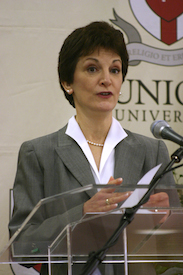 Mona Charen is a syndicated columnist and political analyst living in the Washington, D.C., area.

Ms. Charen began her career at National Review magazine, where she served as editorial assistant. On her first tax return at the age of twenty-two, Ms. Charen listed her occupation as “pundit,” explaining later, “You have to think big.”

In 1984, Ms. Charen joined the White House staff, serving first as Nancy Reagan’s speechwriter and later as Associate Director of the Office of Public Liaison. In the latter post, she lectured widely on the administration’s Central America policy. Later in her White House career, she worked in the Public Affairs office, helping to craft President Reagan’s overall communications strategy.

In 1986, Ms. Charen left the White House to join the presidential quest of then Congressman Jack Kemp as a speechwriter.

Ms. Charen launched her syndicated column in 1987, and it has become one of the fastest growing columns in the industry. It is featured in more than 200 papers, including the Boston Globe, the Baltimore Sun, the St. Louis Post-Dispatch, the Atlanta Journal and Constitution, and the Washington Times. She spent six years as a regular commentator on CNN’s Capital Gang and Capital Gang Sunday, and has served as a judge of the Pulitzer Prizes.

Ms. Charen is a frequent guest on television and radio and is married with three children.