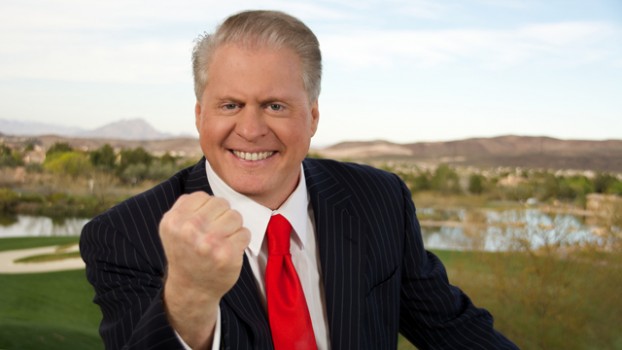 This is Part 2 of 2 of our interview with author, businessman, and political insider, Wayne Allyn Root.  Learn more about his new book, his conversion from the Libertarian to the Republican Party, and his views on Donald Trump and the 2016 GOP presidential primary!

Congratulations again Mr. Root on your new book, The Power of Relentless: 7 Secrets to Achieving Mega Success, Financial Freedom, and the Life of Your Dreams!  Can you give us a sneak preview and let us in on some your secrets?

In this book you’ll learn one of great secrets of success- “to live each day with RELENTLESS enthusiasm unknown to mankind.” And you’ll learn my exact, detailed vitamin regimen (25 years in the making) that gives me this world-class energy, enthusiasm, confidence and intensity.

In this book you’ll learn how to be in RELENTLESS MOTION like the Energizer Bunny.

In this book you’ll learn the secret of RELENTLESS CHUTZPAH. 9 rules that turned a tiny band of homeless persecuted people- into pound for pound the greatest economy, prosperity, technology and military in the world today- Israel.

In this book you’ll learn RELENTLESS TRIAD- how to super-charge your morning and start your day one hundred steps ahead of your competition by 9 AM each morning.

After reading and studying the 7 secrets in this book, you’ll always be in motion. You’ll always play on offense- attacking relentlessly and aggressively. You’ll always take action. Never give up or give in. Nothing can defeat you. You’ll take risks like a gunslinger and riverboat gambler. You’ll spend your days pitching instead of bitching! You’ll just keep hunting, hitting and hammering until you turn your dreams into reality.

You were a political novice and newcomer when you won the Libertarian Vice Presidential nomination in 2008. Why did you switch back to the Republican Party?

I was born a Republican-conservative. I started my political career at age 3, handing out literature for Barry Goldwater, in my fathers arms, outside a supermarket in Mt. Vernon, New York. I’ve always been a patriot and Republican. I always will be. I bleed Republican red, white and blue.

I left in 2008 because I was disillusioned and disgusted with George W. Bush’s irresponsible spending and debt explosion. I believed that a Republican’s job is to lower the debt while in office, not increase it by $4 trillion.

What do you think of Donald Trump and the 2016 GOP presidential primary so far?

Donald Trump is a good man. Donald and I send notes back and forth to each other. Donald endorsed “The Power of RELENTLESS”- I’m proud of his words on the back cover of my book. I believe the key to victory for the GOP is to no longer bring a knife to a gunfight. If we want to save America, we need to bring a nuclear weapon to the gunfight. Donald Trump’s mouth is a nuclear weapon!

Obama has run roughshod over the GOP leadership. Our own leaders seem helpless to stop him. People like John Boehner, Mitch McConnell and of course Supreme Court Chief Justice John Roberts are useless. With friends like them, who needs enemies? They’ve accomplished nothing. Worse, they are setting us backwards. I believe our Republican leaders in D.C. are either incompetent cowards, or they are being bribed, blackmailed, or both.

Into the fight steps Donald Trump. The knock on Donald is that Donald isn’t “nice” or well mannered. He’s sometimes offensive. Well I believe it’s time to stop being “nice.” “Nice” doesn’t work in politics. “Nice” guys finish last in politics. “Nice” is killing middle class jobs. “Nice” has led to negative GDP growth. “Nice” has led to more businesses closing than opening each day for the first time in America’s history. “Nice” has left the border wide open to an illegal alien invasion, the bankruptcy of America and a terrorist attack like 9-11.

Trump isn’t afraid to fight like our future is on the line- because he understands it is. He isn’t afraid to offend. He isn’t afraid to expose the cowards and frauds in his own GOP leadership for what they are. He refuses to be “politically correct” when he sees corruption and idiocy. He won’t back down or apologize for telling the truth. Donald Trump is most importantly RELENTLESS.

I think certain times demand certain kinds of people. Donald Trump may just wind up being the right man, with the right mindset, for these times.