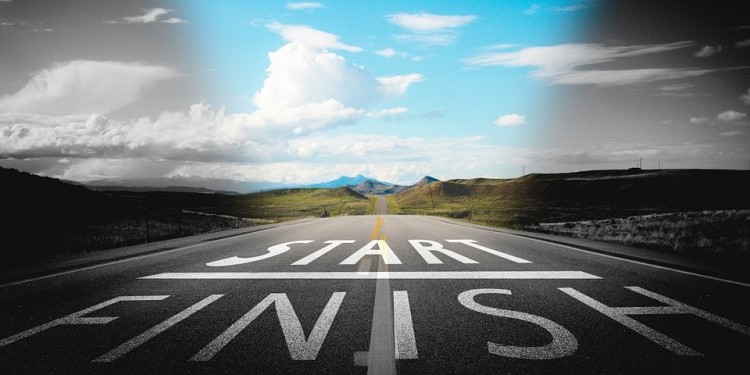 At the tail end of the debilitating Obama administration’s economic policies, Peter Ferrara – the senior fellow at The Heartland Institute, offers hope and a blueprint for America to get back on the road to freedom and prosperity in our exclusive author interview below.

Peter Ferrara is senior fellow for entitlement and budget policy at The Heartland Institute, a senior fellow at the Social Security Institute, and the general counsel of the American Civil Rights Union. He served in the White House Office of Policy Development under President Reagan, and as Associate Deputy Attorney General of the United States under President George H. W. Bush. He is a graduate of Harvard College and Harvard Law School.

Congratulations Mr. Ferrara on your new book, Power to the People: The New Road to Freedom and Prosperity for the Poor, Seniors, and Those Most in Need of the World’s Best Health Care!  Can you give us an overview of your book and tell us why you wrote it?

I wrote the book to provide the roadmap to how to make government much much smaller through politically appealing, even populist, reforms precisely in the area that seems most hopeless for free market conservatives to accomplish that these days – entitlement reform.  The most important point for conservatives is that far, far more can be accomplished, in terms of reduced government spending, by fundamental structural reforms that change the way the entitlement programs operate, than by trying to cut benefits for the poor, seniors and the sick receiving benefits from those programs.  What is needed is entitlement reform, not entitlement cuts. 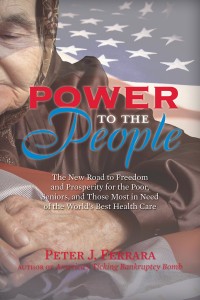 I mean sweeping, sweeping fundamental change, reducing federal spending over a generation by at least half or more from what it would be otherwise without such reforms.  That includes all of the major entitlement programs, Social Security, Medicare, Medicaid, Obamacare, and welfare.

These programs are currently so outdated and counterproductive that they can be fundamentally reformed to cost far, far less, while making the poor better off, seniors better off, and providing much better health care for those in need.  These are all proven reforms that have been shown to work spectacularly in the real world.

The most provocative way to put it is that through these reforms poverty in America will be categorically eliminated, middle class working people will be empowered to retire as millionaires, and health care for all will be assured whenever it is needed, with no individual mandate, no employer mandate, and trillions in reduced taxes, spending, and regulatory burdens.  Yet, altogether these reforms would reduce government spending by the greatest amounts in world history.  After a generation, federal spending as a percent of GDP would be reduced by half or more from where it would be otherwise.

Moreover, the reformed programs would also be massively pro-growth as a result, instead of dragging the economy down, as they do today.  Instead of broadly discouraging capital formation and investment, as well as labor force participation, these structural entitlement reforms would reverse those effects, pumping huge waves of capital and labor into the economy, which would create a long term economic boom, even for some time above the long term, American economic growth trendline that made America the richest and mightiest economic and military power in world history.

First, savings, investment and insurance accounts for each family, voluntarily chosen by each worker, as in Chile, would better perform the functions of Social Security and Medicare.  With such accounts, seniors from all income levels would receive not benefit cuts, but much higher benefits than Social Security even promises, let alone what it can pay, and better health care than under Obamacare’s Medicare.  And they would each individually choose their own retirement age, with market incentives to delay it as long as possible, so their account would accumulate more.

After a lifetime of much savings and investment of less than what they and their employers would otherwise be required to pay in Social Security and Medicare taxes, middle income families would accumulate close to a million dollars or more by retirement.  That would do more to reduce inequality than everything ever dreamed up by Hillary Clinton and Elizabeth Warren combined.

Ultimately, each worker would have the complete freedom to choose private sector alternatives for all the benefits financed by the payroll tax today.  With all these benefits ultimately financed through private financial markets, rather than through taxes and redistribution, this reform alone would produce the greatest reduction in government spending in world history.  These reforms would ultimately produce close to a trillion dollars a year in increased capital investment, promoting booming economic growth.

Second, following the model of the enormously successful 1996 welfare reforms, all federal means-tested welfare reforms should be sent back to the states, with the continued share of federal financing provided through fixed, finite block grants to each state.  Each state would then be free to choose to redesign new welfare systems with all assistance for the able-bodied contingent on showing up daily for work, as envisioned in the original Reagan concept of workfare.

Instead of taxpayers paying the bottom 20% of the income ladder a trillion dollars a year not to work, private employers would pay them more to work, as resulted from those 1996 reforms of just one welfare program, out of dozens more remaining.  That would result in further dramatic reductions in government spending, while vastly increasing the labor supply flowing into the economy, further promoting booming economic growth. 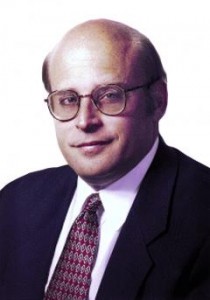 When doing your research, what was the most shocking thing you discovered?

The most shocking thing is that the nation’s taxpayers are basically paying the bottom 20% of the income ladder a trillion dollars a year not to work.  The resulting non-work is the root cause of poverty.  But full time work at today’s minimum wage, plus today’s Earned Income Tax Credit, plus today’s Child Tax Credit equals or exceeds the poverty line for every possible family combination.  That is why a work safety net assuring the able bodied only a work assignment, as in the old Reagan concept of workfare, would eliminate involuntary poverty in America entirely.

Do you believe the US is on the path of Greece, in regards to their uncontrollable entitlement program spending?

No doubt, without fundamental, structural, entitlement reforms as I advocate here, America would end up exactly like Greece, with the markets refusing to lend the federal government enough money to cover its deficits, effectively requiring immediate cuts to balance the budget with no further delay.  That would effectively throw the highly vulnerable people, the poor, seniors and the sick, dependent on these entitlement programs, out in the street.

Tell us a little more about yourself personally!

Tags: Peter Ferrara, Power to the People, The New Road to Freedom