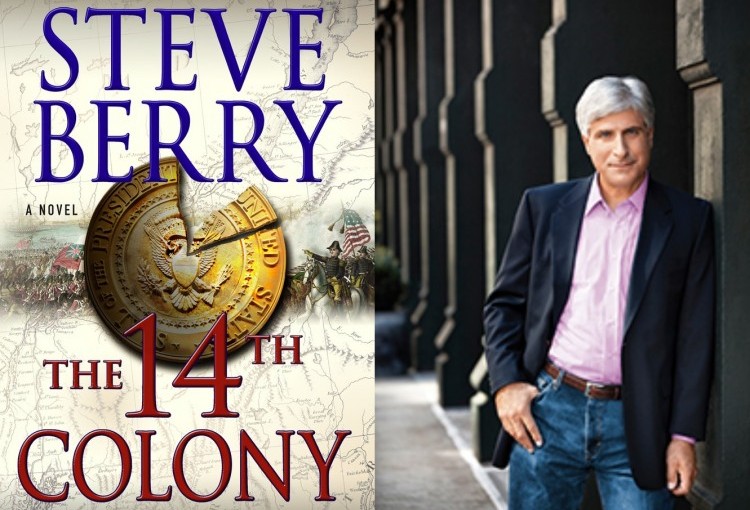 Russian spies, the Constitution, and Cotton Malone – all the ingredients you need to make a heckuva thriller novel! Steve Berry is at it again in his new book, The 14th Colony (Cotton Malone Series #11).  Read our exclusive author interview with him below as he gives us sneak previews about his new book, discusses the legacy of the Cold War, and why history is important to preserve.

Congratulations Mr. Berry on your new book, The 14th Colony (Cotton Malone Series #11)!  Can you give us an overview of your book, and what was your inspiration in writing it?

The inspiration came from something that happened on June 7, 1982.  Safe inside the Vatican behind closed doors, for the first time in history a pope and a president met alone.  To this day no one knows what they talked about for 50 minutes.  No agenda existed, no recording was made, no notes taken.

Historians are convinced that a deal was made, a tacit agreement of  cooperation, both men having survived an assassin’s bullet, both men sharing a common goal:  the end of communism.  Whether that indeed happened we will never know.

What we do know is that over the next 6 years Ronald Reagan and John Paul II, working independently of one another, brought the Soviet Union to its knees.  And from that was born The 14th Colony.

One of the big themes of your book is the Cold War.  Do you think Americans today, especially young people, really understand the threat the Soviet Union was during the Cold War?

Not in the least.  It’s a distant memory of something the vast majority of people never experienced.  It’s just another chapter in a history book.  Not for me.

The Cold War dominated America for 40 years and affected nearly every aspect of the United States.  It was the #1 threat to national security.  Then a former-actor came along, who everyone (including the Soviets) underestimated, and changed the world.

You’re a big historical preservation advocate.  Why do you think it is so important to study history, and preserve it?

Historic preservation establishes roots and community pride.  It teaches, inspires, makes our cities and towns more attractive, and encourages travel and tourism.  It literally creates assets perfect for economic development.  Saving our history is not only important, it’s smart.  Like John Steinbeck wrote, How will we know it’s us without our past?