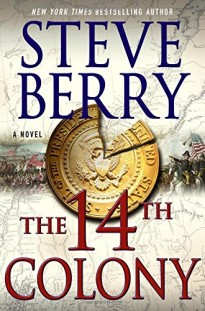 The 14th Colony is the newest installment in Steve Berry’s Cotton Malone series of thriller novels, offering up action, history, and political tensions in one very successful formula. The 14th Colony combines the aftermath of the Cold War with the mysteries of the War of 1812, throwing our erstwhile secret agent into yet another adventure.

The novel starts with a conversation between Pres. Ronald Reagan and St. Pope John Paul II, the two discussing their multi-faceted plan to degrade and destroy the Soviet Union. Those who were alive for their heyday, and even those who have only read about it, will be able to recognize both men, and recognize the events and the motives that drove them. The planned fall of the Soviet Union engendered by the Pope and the President motivates the main antagonist, the ex-KGB agent Alexander Zorin. This obviously brings to mind another famous ex-KGB operative, the one and only Vladimir Putin.

Malone himself enters by crashing a plane in Siberia, which calls back to the Gary Powers U-2 incident in the 1960s. From there, Malone has to fight Zorin in order to survive, and to thwart Zorin’s plan to muck with the presidential succession that will be happening in three days. The lynchpin of the tensions rests on flaws in the Constitution and the succession; Zorin’s plan is to kill both the President and Vice-President elects, in order to destabilize the country. Fans of the recent movies White House Down and Olympus Has Fallen will enjoy that aspect of the plot.

But wait, there’s more! Zorin plans to use hidden Cold War weapons, and utilize a secret in the archives of the Society of Cincinnati, one of America’s oldest and most secretive fraternal orders. Their involvement gives readers two interesting plot lines to follow: the Evil Empire striking back and the Society’s three possible plans to invade the titular “14th Colony”, Canada. It’s like a cross between the Soviets and National Treasure!

And Malone isn’t just battling Zorin or the clock; he’ll have to confront a crippling fear and weakness of his, which adds a personal angle to the tumult happening around him. Any fan of the Cotton Malone series will enjoy this book, which builds off of past events in the series, and further develops well-known and recurring characters, from outgoing President Danny Daniels to spymaster Stephanie Nelle.

Thriller fans will enjoy the climactic fight scenes, global chases, political implications, nuclear weapons and historical flavor, all of which synthesize into a gripping and enjoyable plot. The book does follow a very formulaic path, but Berry deftly keeps the heat on and the pressure up in his latest Cotton Malone book.

History-obsessed and conservtaive readers will have a lot to enjoy, from the Reagan cameo and Cold War politicking to the fight scenes to the historical elements, especially those involving our Founders and the US Constitution. The Constitutional flaw that Zorin seeks to exploit highlights both the importance of the document and the importance that security plays in defending our liberties, a classic conservative theme.

Whether you’ve followed Cotton Malone since the beginning or are just looking for a new thriller to enjoy, The 14th Colony is definitely a book you should check out.