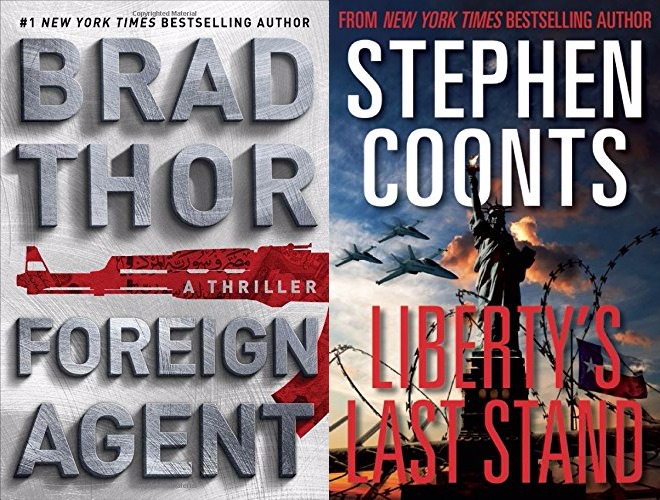 WASHINGTON, DC – With the Orlando terrorist attack occurring last week, Americans were searching for some heroes to take on radical Islamic terrorism, as President Obama and Attorney General Loretta Lynch have refused to do so.  Two new thriller novels from master novelists Brad Thor (Foreign Agent) and Stephen Coonts (Liberty’s Last Stand) offer readers heroes that are not politically correct and will do what needs to be done.

In the No. 2 spot, Brad Thor’s new book is a continuation of his successful Scot Harvath series as he takes on international terrorism in Russia and the Middle East.  Thor is one of the most successful conservative-themed novelists who has repeatedly returned to the bestseller list.  In the No. 6 spot, famed fiction writer Stephen Coonts pens his first overtly political yarn directly correlating illegal activity that occurred in the Obama administration to an eventual secession of the state of Texas.

“In the last week, America was looking for heroes in light of the horrific Orlando terrorist attacks, and definitely found none in the Obama administration,” said Christopher Malagisi, Editor in Chief of the Conservative Book Club.  “With Attorney General Loretta Lynch and President Obama playing the PC-game with the Omar Mateen transcripts, it’s not too difficult to understand why Americans are looking for a brave protagonist.”

Sneak Preview of the Week:

Crisis of Character: A White House Secret Service Officer Discloses How Firsthand Experience with Hillary, Bill, and How They Operate