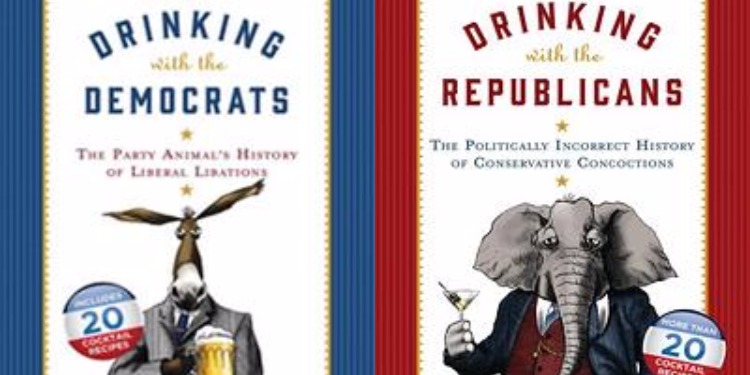 Organized by president from both Republican and Democratic administrations, these fun books include hysterical drinking anecdotes from all White House administrations (like Richard Nixon drunk dialing from the Oval Office), as well as recipes for favorite presidential libations.

These new books also allowed me to correct perhaps a half dozen little errors—“gremlins” I like to call them—that appeared in Mint Juleps with Teddy. Also, the cover art from Joshua Taggert is, in my opinion, fantastic.

What was your inspiration in writing books like these?

The inspiration for all of these books was to explore the role of alcohol in various presidential lives, political campaigns, and administrations. For example, during Prohibition, what presidents actually followed the letter of the law? Warren G. Harding certainly did not; he often went to the golf course with a fifth of whiskey stashed in his golf bag.

When I first learned of that fact, it made me curious to explore what all of the chief executives drank—from Washington to Obama.

Give us the best GOP and Democrat drink recipe and who drank them.

On the GOP side, The McKinley’s Delight/Remember the Maine is an interesting cocktail. It is authentic in that a St. Louis bartender whipped this up in honor of William McKinley at the 1896 Republican Convention. It is a cousin of what we know as a Manhattan and here it is:

Shake it up, pour over ice. Serve in a double old fashioned glass.

On the Dem side, a weird drink recipe comes from Bill Clinton’s student daze at Oxford. He supposedly liked to have an occasional Snakebite.

Pour 8 oz. of hard cider into a chilled glass.

Then float 8 oz. of chilled lager beer on top of the hard cider. (Pour this over the back of a spoon to perform this in a delicate manner.)

**You can add ¼ oz. of black currant liqueur for a variation of this drink that the Brits call a Diesel

Can you give us one interesting tidbit about a GOP and Democrat president that stood out from the others as a sneak preview for your book?

Well, if we count George Washington on the GOP side (which we did for this book), I am not sure how many people realize that the Father of our Country once had a serious whiskey distillery operation going at Mount Vernon. At its zenith, there were five stills producing massive amounts of whiskey. Washington’s workers then sold barrels of this strong whiskey (it was probably quite rough; a cousin of what we might call “moonshine”) from the back of wagons in Alexandria, Virginia.

Keeping with the whiskey theme, President Harry Truman was fond of knocking back a few ounces of bourbon in the morning! He would typically take a brisk two-mile walk, then relax with a rubdown, and follow that with this morning “shot” of bourbon—an “eye-opener” for “Give ‘Em Hell” Harry and perhaps for readers who did not know of this little fact before.