9 Presidents Who Screwed Up America: And Four Who Tried to Save Her 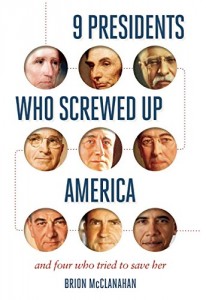 What makes a president great and worthy of emulation? We have grown far too accustomed to judging all of our political leaders as if they were Roman Emperors or European monarchs of old. We are most guilty of this habit when it comes to ranking the relative successes of American presidents. In his new work, 9 Presidents Who Screwed Up America: And Four Who Tried to Save Her, Brion McClanahan demonstrates why the founding fathers would turn over in their graves if they knew that such a standard had become the rule for judging our presidents.

Is the presidency a “bully pulpit” from which the commander-in-chief propounds his policy agenda upon the country? This is how Teddy Roosevelt saw things. Should the president be a strong military leader who has the good sense to know when to ignore the law or past treaties when he has the long-term self-interest of the nation in mind? This is how Andrew Jackson executed his rule. By contrast, should the president be a faithful executor of the law of the land while resisting attempts to secure his legacy through bold, but unconstitutional actions? That is how Calvin Coolidge served throughout his tenure in the White House.

The actions of each of these men mentioned above is covered in fascinating and at times infuriating detail as we see how they each pass or fail the test of a good presidency set forth by McClanahan. This test asks whether or not the president kept his oath of office to uphold the Constitution and protect the republic from all enemies, foreign and domestic. You would be surprised how many great “heroes” of the American presidency are brought down a few pegs as McClanahan systematically subjects their records to this simple standard. We have grown so accustomed to hearing the oath of office discussed casually that we forget an important implication it contains. At times, the domestic “enemies” that the president must vanquish are the ambitions within himself.

This struggle goes on in the mind of every president when he faces the fact that something he wants to do for the good of his country (as he sees it) is technically impossible given the boundaries set by the Constitution. The long and treacherous battle to secure an amendment to make his goal legal is either too daunting or appears impossible. It is at this exact juncture that the great presidents are separated from the merely average or the downright nefarious. The moment the president sides against his oath of office and in favor of his policy preference is the moment he has ceased to serve the people of the United States.

He now serves the vision of the greater good which is constrained only by his own imagination and inhibitions. At that movement, we have lost John Adams’ “nation of laws,” and we have become a mere “nation of men.” You may ask, what is so bad about being a nation of men? Almost all other countries are just that. In the United Kingdom, they long ago lost the constitutional protections of the Magna Charta and the Petition of Right which served as the ancestors of our own Constitution. Now, virtually any law that Parliament can pass through is unchallengeable on any constitutional basis. Law has become merely a debate over which policy preferences should prevail.

It is that very fact which led our founders to write down the Constitution and spell it out in vivid detail so that the very abuses that King George III and Parliament inflicted upon them could never be inflicted upon later generations of Americans by their own executive and legislature. The problem with being a nation of men and not of laws is that your government is only ever as good as the men inhabiting it, whereas a constitutional regime is moderated by the restraints of the Constitution. No matter how avaricious or grandiose a given ruler is, if the Constitution is still enforced, he will always be limited by it.

There may be times where exceptionally gifted and virtuous leaders strain against the bonds of the constitution. The great deeds which they would do for their countrymen are made more difficult because of the amendment process. But as Thomas Jefferson famously said “In questions of powers, then, let no more be heard of confidence in man, but bind him down from mischief by the chains of the Constitution.” Paying that small price in those rare times of virtuous men safeguards the liberties of the people throughout countless other instances in which men of average or bad intentions and inhibitions would strip the freedoms of the populace in the name of progress.

9 Presidents Who Screwed Up America is a must read for any conscientious American who wants to see the executive overreach of our current president and future presidents restrained. The book sketches out all the essential events in the history of the American presidency which produced so many of the problems we see at every level of government today.

I urge everyone who has a love for the Constitution and for our nation to pick up a copy of this vital piece of historiography. To quote McClanahan at his best and most succinct: “In the Constitution, the founding generation left us a vehicle for preserving self-government. We ignore it at our peril.”
Original CBC review by Isaac Woodward