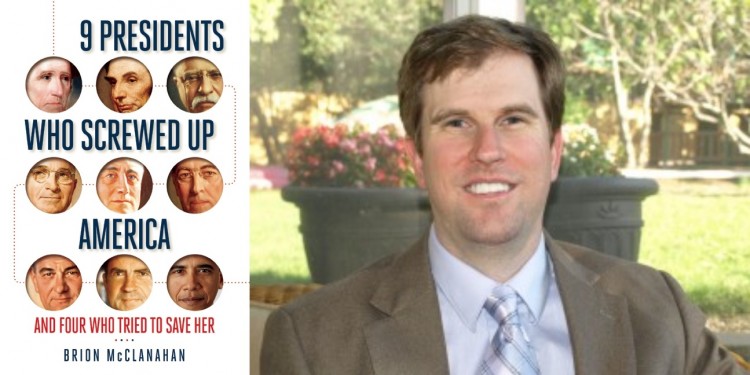 Who were the 9 presidents that screwed up America? Find out in our interview below with author Brion McClanahan.  McClanahan is a celebrated historian and the author of four books, has lectured across the Southeast and appeared on dozens of radio programs to discuss American history and the founding traditions of the United States. Read our interview below to also learn who the four presidents were who tried to save America!

Congratulations Brion on your new book, 9 Presidents Who Screwed Up America, And Four Who Tried to Save Her!  Can you give us an overview of your book, and what was your inspiration in writing it?

Thanks!  During the media campaign for my The Founding Fathers Guide to the Constitution in 2012, I was often asked about a statement I made where I said that virtually every president in the 20th century should have been impeached.  This was shocking to many people, so I thought I needed to clarify my position.  I also wanted to explain why President Obama is just the latest in a long line of serial abusers of executive power.  It didn’t happen overnight.

I trace the origins of executive overreach and expose the most blatant examples of executive misconduct.  Many readers may be surprised by those included in the book because the list of those who “screwed up America” contains men who are often ranked as the greatest presidents in American history, and the three of the “four who tried to save her” are never considered great by the historical profession or the public at large.  I have inverted the traditional rankings.   Even if the reader does not agree with my conclusions, it will make people think.

How do you define “saved” and “screwed up”?

The book measures presidential success by the only yardstick Americans should use, namely how did the presidents uphold their oath “to preserve, protect, and defend the Constitution of the United States” according to the Constitution as ratified in 1788.  Those who “screwed up” America consistently violated their oath according to the original Constitution, while those who tried to “save her” generally followed the parameters of executive power established by the founding generation.

Without taking away too much from your book, who were one or two presidents that “screwed up” America, and one that helped “save” it, a 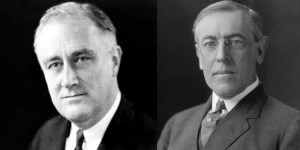 The “screwed up” group was a challenge because I could have included more!  Obviously, the low hanging fruit were Franklin Roosevelt and Woodrow Wilson, but there are a few surprises in the bunch going back to the earliest administrations.  As for the “good guys,” the best president in American history according to the original Constitution is John Tyler.  Who? You’ll have to read the book to find out why.

What are some takeaways you would like readers to leave with after reading your book?

I would want readers to have a better understanding of executive power and to start a conversation about what we should expect from the executive branch.  The founding generation feared unlimited executive power above all else.  Just read the Declaration of Independence and that becomes clear.  We need to be consistent in our disdain for executive abuse.  Just because “our guy” did things we like through unconstitutional means does not make it correct.  That opens the door to “their guy” doing the same thing.  See Barack Obama.

Within the current 2016 field of Democrat and Republican presidential candidates, who is more likely to “screw up” America, and who could “save” it?

Obviously, both Clinton and Sanders would screw up America, but so would Jeb! and any other candidate the establishment Republicans march around as the “savior” of the American political system.  Ted Cruz and Donald Trump could “save” it for different reasons.  They would be the best among the remaining candidates, but we have gone so far off the rails that the only hope for “saving” America is either through the States or through a series of Constitutional amendments that would curtail executive power and bring it back to the founders’ design.

Like many conservatives, I was introduced to intellectual conservatism through Russell Kirk’s The Conservative Mind and George Nash’s The Conservative Intellectual Movement in America.   From there, I found Walter Williams, Pat Buchanan, Richard Weaver, Mel Bradford, Stan Evans, Murray Rothbard and a host of other men who are often considered “Old Right.”

I also started reading the founding generation themselves and several men who are not household names—St. George Tucker, John Taylor of Caroline, and Abel P. Upshur for example—influenced my views on how the Constitution should be interpreted.  Historians Forrest McDonald and Clyde Wilson honed my understanding on the early republic.   My outlook on life was forged by my grandparents who emphasized hard work, dedication to family, defense of hearth and home, a love of history, and a respect for God and tradition.