The Founding Fathers Guide to the Constitution 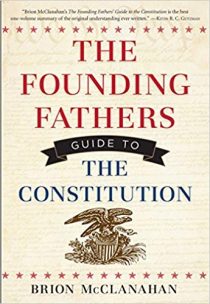 The two key arguments against bothering with constitutional restraints on government are “who knows” and “who cares”: we can’t know what the Constitution means, and we shouldn’t care even if we did.

In The Founding Fathers Guide to the Constitution, historian Brion McClanahan addresses the “who knows” argument, the claim that the Constitution and the intentions behind it are too inscrutable to be any kind of guide. McClanahan, who is following up his Politically Incorrect Guide to the Founding Fathers, was the last doctoral student of the recently retired Clyde Wilson, professor of history at the University of South Carolina, editor of the Papers of John C. Calhoun, and, according to Eugene Genovese, one of the ten top Southern historians in America.

McClanahan’s is a valuable if unusual volume: it’s in effect a clause-by-clause analysis of the Constitution but the only sources the author will admit are the records of the Philadelphia Convention, the records of the state ratifying conventions, The Federalist, and the essays of various Antifederalists. No later glosses, no Supreme Court cases, no testimony from the practice of the early republic. McClanahan wants the Constitution to speak through those who wrote and debated it.

This is a worthy project, and McClanahan executes it ably.

Although McClanahan’s review of the Constitution is fairly exhaustive, investigating the debates and intentions behind even relatively inoffensive provisions that generate little heat today, the discriminating reader will be interested in how the author handles the more contentious clauses.

The “general welfare” clause comes under scrutiny first. McClanahan finds no evidence that the broad interpretation one encounters today was part of the stated intention of the Constitution’s supporters, and it is to them, Thomas Jefferson said, that we are to look for proper interpretation.

James Madison, for instance, noted that the Articles of Confederation had included an appeal to the “general welfare,” and no one had taken this to mean the Confederation government had thereby been granted an open-ended authority to legislate on matters other than the ones expressly delegated to it in that document. Moreover, said Madison, a broad interpretation of the clause would have rendered the specific enumeration of powers in Article I, Section 8 nugatory and absurd.

It was Connecticut’s Roger Sherman who moved that the phrase be added, so McClanahan seeks out Sherman’s view of what constituted the general welfare. In June 1787, Sherman said: “The objects of the Union … were few—first, defence against foreign danger; second, against internal disputes and a resort to force; thirdly, treaties with foreign nations; fourthly, regulating foreign commerce, and drawing revenue from it. … All other matters, civil and criminal, would be much better in the hands of the states.”

That, for Sherman, was the “general welfare and common defense.”

The consensus among the ratifiers regarding the “necessary and proper” clause, every stumped social-studies teacher’s favorite fig leaf, was that it gave Congress no additional powers at all. (That clause says the federal government will have those powers that are necessary and proper to carry the enumerated powers into effect.) It was merely a clarifying statement, and the Constitution would, as Alexander Hamilton put it, be changed not one whit if that clause were “obliterated.”

In the course of commenting on that clause, Archibald Maclaine said during North Carolina’s ratifying convention that the states would prevent the federal government from usurping power:

If Congress should make a law beyond the powers and the spirit of the Constitution, should we not say to Congress, ‘You have no authority to make this law. There are limits beyond which you cannot go. You cannot exceed the power prescribed by the Constitution. You are amenable to us for your conduct. This act is unconstitutional. We will disregard it, and punish you for the attempt.’

At Virginia’s ratifying convention, future United States attorney general Edmund Randolph likewise expected the states to play an active role in preventing federal encroachments on their reserved powers. Any attempt on the part of the federal government to exercise a power not delegated to it would be an “absolute usurpation,” he said, and “the influence of the state governments will nip it in the bud of hope.”

In our own day there has been a modest but noticeable stirring among the states to push back against unconstitutional federal laws. This phenomenon has been met by the law-school response—a designation I do not intend as a compliment—that the “supremacy clause” of Article VI forbids such resistance, for, the argument goes, “federal law trumps state law.”

Law professors seem committed to the proposition that the supremacy clause reads: “This Constitution, and the Laws of the United States which shall be made in pursuance thereof, plus any old Laws the federal government may choose to impose, whether in pursuance of the Constitution or not, shall be the supreme law of the land.” (The reader will notice that the italicized portion is your reviewer’s gloss on their interpretation.)

The key provision of the clause is “which shall be made in pursuance thereof.” In other words, the supremacy clause does not apply to laws made in defiance of the Constitution.

And as McClanahan shows, this was the interpretation agreed upon by the ratifiers. Hamilton himself explained at New York’s ratifying convention that while on the one hand “acts of the United States … will be absolutely obligatory as to all the proper objects and powers of the general government,” at the same time “the laws of Congress are restricted to a certain sphere, and when they depart from this sphere, they are no longer supreme or binding.” In Federalist 33, Hamilton noted that the clause “expressly confines this supremacy to laws made pursuant to the Constitution.”

At North Carolina’s ratifying convention, James Iredell told the delegates that when “Congress passes a law consistent with the Constitution, it is to be binding on the people. If Congress, under pretense of executing one power, should, in fact, usurp another, they will violate the Constitution.” In December 1787 Roger Sherman observed that an “excellency of the constitution” was that “when the government of the united States acts within its proper bounds it will be the interest of the legislatures of the particular States to Support it, but when it leaps over those bounds and interferes with the rights of the State governments they will be powerful enough to check it.”

McClanahan’s conclusion, having made a thorough review of the primary sources, is hardly surprising: the Constitution is not being interpreted the way the ratifiers were assured it would be. Yes, nationalists could be found at the Philadelphia Convention of 1787, but their proposals were by and large rejected, and the Constitution was sold to the state ratifying conventions as a document that preserved the sovereign powers of the peoples of the states.

In fact, says McClanahan, fashionable modern opinion—which finds vast reservoirs of federal power tucked away in the various clauses we’ve examined here—is pretty much the opposite of how supporters of the Constitution themselves insisted the document would be interpreted.

So what can we do about it? McClanahan suggests “a better educated public.” Translation: things are grim.

I am nit-picking, to be sure. McClanahan has not written a strategy manual, and in any event the proper way forward is far from obvious.

But presumably we have reached the point at which we are permitted a few deviations from the received narrative of U.S. history, which holds that the stupid Articles of Confederation, with all the inevitability of a law of history, simply had to give way to the Constitution.

The difficulties some people complained of under the Articles were trivial in comparison to what Americans suffer under its successor document. It’s time we acknowledged this, instead of thoughtlessly repeating the complaints against the Articles we learned by rote in junior high. Keith Dougherty’s Collective Action Under the Articles of Confederation shows that the states in fact contributed more to the Confederation government than the political scientists’ rational-choice models would lead us to expect.

James Madison biographer Kevin Gutzman surveys the evidence and concludes that Richard Henry Lee, a one-time president of Congress from Virginia, “was right to say that the financial difficulties faced by Congress in 1787–88 resulted from an enormous war against the world’s most powerful nation, not from the failure of the free, decentralized government for which the war had been fought. In other words, George Mason was right to say that it didn’t make sense to surrender decentralized, republican government in 1787-88 only four years after winning it in 1783.”

But the Constitution is what we have, and Brion McClanahan has performed a valuable service for historians and concerned Americans by showing that the country’s governing document is not so inscrutable after all, and we need not rely on judges and law professors to tell us what it means. The historical record is a better guide.

Tags: Brion McClanahan, The Founding Fathers Guide to the Constitution