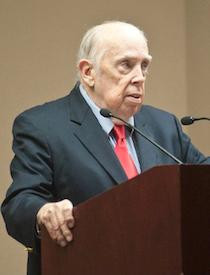 Upon graduation, Evans became assistant editor of The Freeman. He joined the staff of William F. Buckley’s fledgling National Review, where he served as associate editor from 1960 to 1973. He became managing editor of Human Events, where he is currently a contributing editor.

In 1959, Evans became head editorial writer of The Indianapolis News, rising to editor the following year—at 26, the nation’s youngest editor of a metropolitan daily newspaper—a position he held until 1974. In 1971, Evans became a commentator for the CBS Television and Radio Networks, and in 1980 became a commentator for National Public Radio, the Voice of America, Radio America and WGMS-FM in Washington, D.C. In 1974, he became a columnist for the Los Angeles Times national syndicate.

In 1977, Evans founded the National Journalism Center, where he served as director until 2002. In 1980, he became an adjunct professor of journalism at Troy University in Troy, Alabama, where he currently holds the Buchanan Chair of Journalism. From 1981 until 2002 he was publisher of Consumers’ Research magazine.