The Theme Is Freedom: Religion, Politics, and the American Tradition 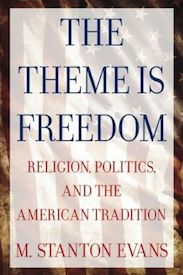 The sources of the freedoms and form of government that Americans once enjoyed are often a subject of dispute. One side claims that the American republic was the product of the Enlightenment and the spirit of the times. The other holds that the break from Britain was essentially a conservative affair provoked by usurpations of liberties by the British crown. Since each thesis is radically at odds with the other in its political implications, the truth of the matter is of the utmost importance.

M. Stanton Evans’ new book, The Theme Is Freedom, is a popularly written discussion of the elements of British history and culture that contributed to the American Founding. Actually, the book touches on a range of topics that relate directly or indirectly to Mr. Evans’ thesis. He argues that not only was the Founding a product of British civilization, it was a product of a specifically medieval heritage, imbued with political notions derived from the history and religion of that era. His case is strong, although the wide-ranging nature of his examination injects a few problematic elements into the text.

The first chapters of the book revolve around a critique of liberalism, which is juxtaposed with a discussion of Christian traditionalism. Evans argues correctly that liberalism, being empty of absolute value content, can never sustain its promises of liberation or freedom. In fact, he suggests that liberalism will ultimately reduce itself to totalitarian tendencies in the absence of a conception of authority beyond the state.

This has been borne out by historical example. The transformation of liberalism toward socialism was fueled by the impetus of its own premises. The classical liberal world view was motivated by belief in an ideology of liberation and based on a theory of atomized individualism. These elements of liberalism necessarily promote an ideology of change. When the end of the liberal program is met, satisfaction cannot be reached for two reasons: the utopian nature of the liberal vision and the perpetual desire for human liberation. Hence, the need to move beyond the capitalist society that formed the original vision of liberalism.

As an alternative, Evans offers a vision of American liberty based on the Anglo-American tradition, rooted in religious axioms. This requires a detailed discussion of medieval law and political structures, the contractual basis of the feudal order, the origins and applications of the common law, British history, the nature of monarchy in Britain, the role of the church in society and politics, theologians’ views of the state, and a plethora of other factors. In fact, the book is worth reading for its educational value on these issues alone. Mr. Evans goes far to document the basis of John Adams’ claim that “The patriots of this province desire nothing new; they wish only to keep their old privileges.”

An important element of this interpretation rests on the issue of contract. Much emphasis in what Mr. Evans calls the “standard treatment” of our history is laid on social contractarian theories of the state that are rooted in liberal and Enlightenment thought. A sizable discussion in The Theme Is Freedom revolves around the issue of contract. Mr. Evans points out that the notion of contract between king and subject derives from the practice of the feudal system, that the colonies were bound by charter to the crown, and many of the early religious settlers formed communities based on compact. This raises the question as to the depth of influence of liberal thought on the birth of our nation. The record of history and the written legacy of the men who laid the groundwork for the republic suggests that it was minimal.

Despite the overall strength of the book, Mr. Evans’ discussion of the contractarian John Locke is flawed. He spends some time suggesting that Locke’s use of social contract theory was not an innovation based on the precedent of the widespread idea of contract. Borrowing from the lexicon of the day, however, does not obscure the radical underpinnings of Locke’s theory. Central to understanding this is the recognition that Locke’s social contract did not revolve around the relationship between the people and the monarchy through a history of agreement and concession. Instead, Locke was a republican, and his social contract was an abstraction agreed to by tacit consent amongst the people. His discussion was wholly theoretical, based on logic and a set of a priori assumptions. If this were not the case, Mr. Evans would not have to provide a lengthy discussion salvaging the Declaration of Independence from the influence of Locke.

This is unfortunate because it can only serve to obscure the message of Mr. Evans’ work. The multiculturalist assault on the civilization derived from England and the diminution of faith, public and private, can serve only one end: the destruction of our legacy of freedom.

Book Review from The Freeman, by Gregory Pavlik