Blacklisted by History: The Untold Story of Senator Joe McCarthy and His Fight Against America’s Enemies 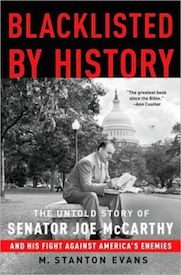 In standard histories of the so-called “Red Scare” of the 1950s, Sen. Joe McCarthy (R-Wis.) is depicted as a lying bully who falsely named helpless victims in the U.S. State Department and other government bureaus as Communists or Soviet agents. Lying and baseless charges of subversion were the supposed essence of McCarthy’s method. History has judged him such a loathsome figure that to this day, some fifty years after the Army-McCarthy hearings, people hurl the term “McCarthyism” to attack any perceived witch-hunt. But now, in “Blacklisted by History: The Untold Story of Senator Joe McCarthy,” veteran journalist M. Stanton Evans shows not only that this portrayal of McCarthy and his cases is mistaken — but that virtually everything else that we’ve been told about McCarthy and his “era” is false.

Evans has spent more than a decade researching this book— poring over vast amounts of data that were unknown to the American public in the 1950s and that corroborate the case McCarthy was making then. Indeed, many of those people McCarthy named as Communists show up in the official records that were suppressed at the time— and yet most of these individuals are still regarded as McCarthy’s victims. And, while McCarthy is often accused of being a liar, Blacklisted by History exposes how the senator’s opponents were covering up or even actively falsifying the factual record, and in some cases lying to the public.

Among the revelations in this ground-breaking book:

A groundbreaking book based on exhaustive research, “Blacklisted by History” is much more than a look at the McCarthy era — it is revealing investigation into how our view of history can so often be distorted.