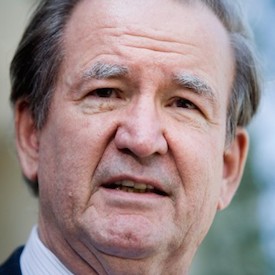 From 1966 through 1974, Mr. Buchanan was an assistant to Richard Nixon, and from 1985 to 1987, White House Director of Communications for Ronald Reagan.

Born in Washington, D.C., educated at Catholic and Jesuit schools, Pat Buchanan received his master’s degree in journalism from Columbia in 1962. At 23, he became the youngest editorial writer on a major newspaper in America, the St. Louis Globe-Democrat.

On leaving the Ford White House in 1974, Mr. Buchanan became a syndicated columnist and founding member NBC’s The McLaughlin Group and CNN’s Capital Gang and Crossfire.

He is married to the former Shelley Ann Scarney, who was a member of the White House Staff from 1969 to 1975.