State of Emergency: The Third World Invasion and Conquest of America 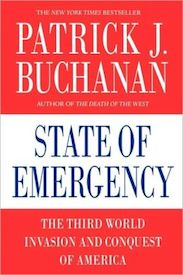 Civilizations die by suicide, not murder, says Patrick Buchanan, and liberalism is the ideology of Western suicide. Its ideas, pursued to their logical end, will prove fatal. And none of those ideas is as certain to bring our civilization to an unhappy end as the proposition that America’s borders must be open to any and all comers, legal and illegal. In “State of Emergency: The Third World Invasion and Conquest of America,” Buchanan explains why the very life of our nation is at stake in the immigration debate. If immigration and border controls aren’t reintroduced, it will be the end of America as we know it — and soon.

Buchanan explains why the massive influx of illegal immigrants into America is nothing less than an invasion — and yet the Bush White House and GOP-controlled Congress appear disinclined to do anything about it. He details how our current policy of “open borders” and nearly unrestricted immigration have brought a stream of criminals and thugs into our nation — for the benefit only of an entrenched political establishment that couldn’t care less about the good of the American people. He explodes myth after myth about illegal immigration — including President Bush’s notorious statement that illegal aliens “do jobs Americans won’t do” and the idea that foreigners somehow have a natural right to come to America.

Nor will all this be an easy problem to solve. Buchanan demonstrates that any presidential candidate who speaks out against the Hispanic onslaught in the American Southwest will now lose the electoral votes of California, Arizona, New Mexico, and Texas. Soon, electoral realities will make it impossible for any serious candidate to speak out against unrestrained immigration. Yet, he points out, if it wanted to, the U.S. Government could secure the Mexican border within weeks — and details the political reasons why this won’t happen, despite the fact that immigration control measures have consistently won large margins of support from American voters.

“State of Emergency” also lays bare the roots of our immigration crisis, providing a capsule history of U.S.-Mexican relations and explaining Mexico’s long-standing grudge against the United States. Buchanan exposes the long-term goals of radical Mexican and Chicano groups that want to erase not only American sovereignty over the Southwest, but also American sovereignty altogether. He warns against the balkanization and tribalism that threaten our future as a nation, and, for those who have forgotten (and there are many), he gets back to basics — explaining what a nation actually is and should be.

America, says Buchanan, could soon be facing its last chance to stave off national suicide. In State of Emergency, he provides a comprehensive primer for all politicians, activists, and concerned citizens who want to stop the flood of immigration before it’s too late.

How illegal immigration threatens every American: