A Republic, Not An Empire: Reclaiming America’s Destiny 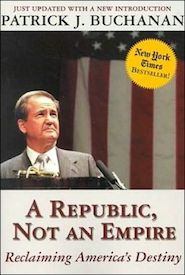 The blood chills as Patrick Buchanan ticks off the lengthening list of U.S. military commitments abroad — commitments that someday may have to be honored with American blood: America has taken on the historic roles of the German empire in keeping Russia out of Europe, of the Austrian empire in policing the Balkans, of the British Empire in patrolling the oceans and sea lanes and protecting the Persian Gulf, of the Ottoman empire in keeping peace in the Holy Land, of the Japanese empire in defending Korea and containing China, and of the Spanish empire in Latin America. Thus, we have undertaken to come to the defense of half a hundred nations around the world on a defense budget that is less than 3 percent of GDP. … Our situation is unsustainable. The steady expansion of global commitments, as relative national power declines, is a prescription for endless wars and eventual disaster.The need for course correction is urgent. “If America is not to end the coming century the way British, French, Germans, and Russians ended this one, we must learn the lessons history has taught us.”

Now, Buchanan calls those lessons to mind in what we declare — unreservedly — to be his finest book to date, and one of the handful most important (not to mention timely) the Club has offered in its 35-year history. Surveying the sweep of American history with his trademark brilliance and brio, Buchanan:

Buchanan persuasively argues that America’s liberty is best protected when she pursues her own interests — and most endangered when she embarks on international crusades divorced from those interests. Today, caught up in policing the world as the “last superpower,” the U.S. has lost sight of where its own vital interests actually lie. Worse, we risk unnecessary wars that are the death of great powers.

Some highlights of his analysis:

“A day of reckoning is approaching,” warns Buchanan. “It is my hope that the price in blood, treasure, and humiliation America will eventually be forced to pay for the hubris, arrogance, and folly of our reigning foreign policy elites is not, God forbid, war, defeat, and the diminution of this republic — the fate of every other great nation or empire that set out on this same course.”

A message from Pat Buchanan to Club members

“A Republic, Not an Empire” was written for several reasons: to refute the charge that I am an “isolationist” who is anxious to wall America off from the world; to expose the malevolent myth that this country was ever a hermit republic; and to lay out the policies and principles, rooted in America’s best traditions, that I believe we must pursue to avoid the fate of all the other Great Powers that went before us.

This is thus the story of how American statesmen, through vision and courage, ruthlessness and guile, quadrupled the size of our republic in a single century to create the most awesome nation the world had ever seen. And it is the story of those 20th century Presidents who, forgoing the great rule of Washington — to avoid permanent alliances and stay out of foreign wars — dragged or deceived us into conflagrations that changed America and the world forever — and not always for the better.

Finally, “A Republic, Not an Empire” was written to introduce America’s young to another view of America’s past than the one they learn in school, so that they might separate true history from propaganda and true heroes and patriots from the reigning myths and legends they have been taught to revere and idolize. I hope you enjoy the book.