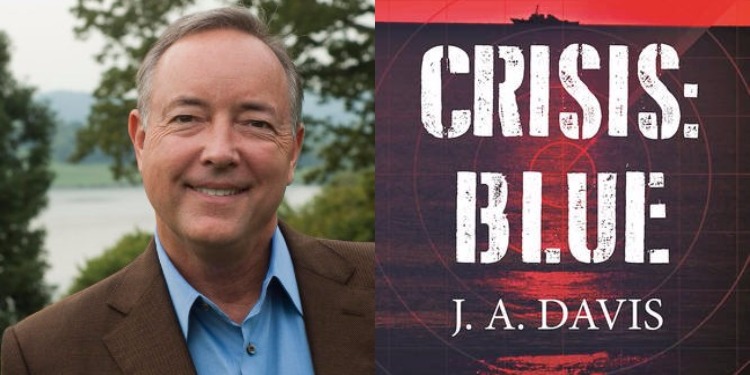 Congratulations J.A. Davis on your new book Crisis: Blue!  Give us an overview of your book.

The book is a geopolitical/medical thriller and is entirely fictional– at least for now because all the situations are plausible given the weakened state the United States is in after the last eight years. In brief, North Korea continues to taunt the United States by detonating nuclear weapons and launching long-range missiles across the Pacific. This threat is suddenly overshadowed by the destruction of the US fleet as it sails through the Straits of Hormuz and into the Persian Gulf. As the crisis escalates, little attention is paid to several blue, bloated, and grossly disfigured Asian sailors who wash ashore in Galveston, Texas. Meanwhile, the North Korean cargo ship, Il-sung, is able to slip into Whiskey Bay, Louisiana, unnoticed, where she offloads her cargo: a highly radioactive weapon of mass destruction.

As more Asian sailors become deathly ill from the many weeks spent at sea in close proximity to their lethal cargo, they are transferred to a small hospital in Carencrow, Louisiana, for treatment. Dr. Rex Bent, an emergency room physician, immediately becomes suspicious and notifies the proper authorities. With their coup de grâce in jeopardy the extremists realize that Dr. Bent–and his wife and confidante, Trissy–must be eliminated without raising suspicion. Pursued and hounded like traitors who had betrayed their country, the Bents are in a race against time, determined to discover the significance of Crisis: Blue.

The inspiration for writing Crisis: Blue came from my father who was the most highly decorated submarine commander during the Cold War. He wrote The Shadow of Peril, a New York Times bestseller for 12 weeks. (But what really drew my attention was his lively stories about drinking martinis with the publisher.) All kidding aside, my experiences at the Naval Academy, serving as a Naval Officer, and being the an E.R./Trauma physician have all shaped my conservative outlook and I wanted to write an all-too-plausible story about the dangers facing America on all fronts, foreign and domestic.

What is your opinion on the current state of North Korea?

North Korea taunts the United States by detonating nuclear weapons and launching long-range missiles across the Pacific. Kim Jong-un is a ruthless dictator playing a very dangerous game. However, unless Pyongyang starts rattling the saber, the United States will take a wait and see position. President-elect Trump has outlined a number of higher priority issues he intends to aggressively pursue in his first 100 days in office.

Do you feel a Donald Trump presidency will help with our ties to North Korea and the region?

Yes, a Donald Trump presidency will clearly define our ties with this rogue nation. President Trump’s aggressive, no-nonsense approach to the dangers posed by North Korea will result in the supreme leader of the Democratic People’s Republic of Korea backing down. Additionally, the appointment of Generals Flynn and Mattis to the Trump cabinet should be of great concern to the despot.

In the region, the People’s Liberation Army Navy Surface Force is expanding so rapidly that China also presents a danger to East Asia. Their strategy for coastal defense has expanded into the development of a Navy with Bluewater capabilities. China now has three fleets with over 660 ships. Additionally, there military occupation of the Spratly Islands in the South China Sea leaves no doubt that this nation has become far more aggressive. However, perhaps with President Trump’s consideration of selecting a businessman with global experience as Secretary-of-State, all concerns with regard to North Korea and China can be diffused through strong engagement.

What are 2-3 things you’d like readers to leave with after reading your book?

Our national security is threatened by indecision, fecklessness, and ignorance. Our borders are unsecure, our politicians are plagued by a weakness of character, and our plan to deal with modern forms of war are outmoded or nonexistent. Crisis: Blue is a story of one man stepping up and being an American hero but the problems he faces are largely of our own making and we must correct them in real life before it’s too late.