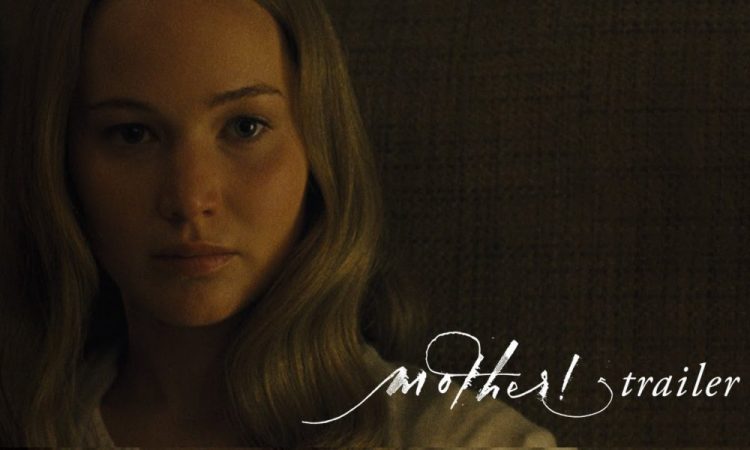 SPOILER ALERT: I discuss many aspects of the movie, but I promise you won’t want to see this film anyway.

After his blasphemous take on the biblical story of Noah in his 2014 film titled Noah, director Darren Aronofsky has decided to double down on his religious incredulity with his new film, mother!.

The movie also wins this year’s award for having the most deceitful marketing campaign in memory, promoting what looked like a post-modern Rosemary’s Baby in its movie trailers, but was really a painful allegory of one man’s “shaking his fists at the heavens,” with all the rage that liberal Hollywood could muster in the age of Trump.

The first two-thirds of the movie is shrouded with traditional horror movie thematic elements, but the latter part descends dramatically into an anarchy never seen before in cinema.  It will bewilder the viewer, it may even impress you with its directorial avant-garde, but it will collapse on itself and nearly make you nauseous, and make you want to walk out of the theater because of its grotesque ending.  I actually did.

Avoid this movie at all costs.  I would not recommend this movie to anyone, and even if you see it, you’ll never want to see it again.

One cannot help but feel that Aronofsky – the man, has a very troubled soul.  He’s lashed out in a way that is rarely seen in the arts and purposely tries to confuse his audience.  But after a thoughtful overnight reflection, it is nakedly clear his intentions were to attack an allusive, passive, and dismissive God, who’s need for love makes him blind or unresponsive to the plight of Man.  The movie also shrieks of man-made caused environmental devastation.  But that’s not all. 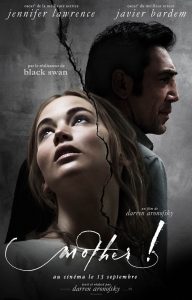 The story innocently starts out with Jennifer Lawrence (referred to as “Her” or “mother”) waking up alone in bed one morning calling out for her husband, Javier Bardem (referred to as “Him”), who is nowhere in sight.  As she gets up from bed and begins to wander through her strange octagonal-shaped house, you quickly realize that they live in a country home far removed from any known civilization, with no driveways or paths leading to or from the estate.

We soon learn that Him is a revered poet who once wrote influential work, but has been hit with a frustrating writer’s block.  Soon after, Ed Harris (referred to as Man) and Michelle Pfeiffer (referred to as Woman) invite themselves to stay at this idyllic house, with the Man claiming to be a lost surgeon looking for a B&B, and whom we later find out claims to be dying.

The next day, their two sons unexpectedly arrive at the house arguing about a will and who gets the Man’s inheritance.  The ensuing argument turns deadly when the older brother kills his younger brother with a blunt object in the house.  Him then picks up the dead brother and purportedly carries him to a hospital that we never see.  At all times we are with Her, observing everything from her perspective – never leaving the house.

After Him returns, there are dozens of unexpected mourners who come to celebrate the life of the good son who died, and pray for the wayward other lost son.  The “celebration” quickly spins out of control and literally causes a flood in the house when the “guests” sit on a non-braised kitchen sink and break it.

While all this is going on, Lawrence’s terror of not understanding these intruders in her home and constantly having to clean up their messes ends with the kitchen flooding and her screaming for everyone to leave the house.

Later that night, Her confronts Him and wonders why he never makes love to her.  Him initially responds aggressively, but it soon turns into a brief lovemaking scene.  That next morning, she awakes and declares that she’s pregnant.  The news is so uplifting that Him becomes inspired to write again about what happened those last couple days and for the arrival of his new child.  Stick with me here as it only gets crazier.

Fast forward nine months and Her is about to have her child and Him has finished his new manuscript.  Later that evening when she prepares a dinner to celebrate her impending pregnancy and the completion of his manuscript, hundreds of admirers of Him show up at their house and begin to praise Him and his work and act like paparazzi, even though the manuscript was just completed that day.  Kristen Wiig arrives on the scene as the Publisher who will soon end up killing some of the house trespassers via execution style.

In a dizzying and frantic pace, the house is overwhelmed with thousands of more sycophants, religious zealots, soldiers, ravers, and thieves ransacking the house and literally tearing it apart.  There’s nowhere Her can go and is forced to have the child in the only room upstairs in the house that is free from the mass chaos ensuing downstairs.

After having her child in one of the most distressful child-bearing scenes ever captured in cinema, Him demands the baby so he can show his followers.  Mother is scared of what will happen to the child and denies him for as long as she can.  This goes on for days until she finally can’t stay awake any longer.  The whole time, Him is sitting in a chair watching Her and the child, waiting for Her to eventually fall asleep.

Mother wakes up and finds that her child is crowd surfing among the sycophants and ravers downstairs and you suddenly hear the neck break of the child.  This next part is so hideous and heinous, I don’t even want to write about it.  But it ends with Mother being beaten near death, with her blowing up the home, and only Him and Her surviving the big bang explosion.

While dying, she says to Him that she has nothing else to give him, yet he still demands her heart.  In the scene that made me walk out (surprised I hadn’t already?), he rips her open with his bare hands, takes her heart and squeezes the life out of it to form a crystal.  He then places this crystal on a pedestal and the house morphs back to the way it was, with a different woman waking up from bed calling out for Him.

Man and Woman are Adam and Eve and their sons were Cain, who kills Abel.  Their argument is based on who will inherit the Man’s wealth, obviously an allegory to how capitalism is corrupt and can lead men to do awful things.  It’s only after a flood in their house that causes all the people to leave, referring to the story of Noah.

While Him was once known for writing one massive piece of work, subtlety referring to the Old Testament, he is now inspired to continue his story after the announcement of his child, and can now write a New Testament.

The dizzying scenes afterwards showcasing war, terror, panic, distress, crying, theft, environmental devastation, over-reliance on technology, etc. are signs of how Man is destroying the earth that Mother Nature gave them.  To the madness and even ridiculousness that this situation is, Aronofsky wants you to be constantly jolted this way and that to bring on confusion, while at all times, Mother portrays us screaming out at nature for calmness, order, and sanity.  Perhaps that’s really why there is an exclamation point included in the title of the movie – mother!

The sycophants and intruders of Mother Nature’s house is caused by a god who simply creates Creation in order for him to be loved.  Even at the end when they’ve killed his child and its Mother, he still wants her bleeding heart so he can squeeze out the remainder of life it has, only to recreate another world where he can be loved again, and again.

To be fair, this movie is quite ambitious, and it’s amazing that a movie company like Paramount would give a director such leeway to make a film such as this in the first place.  But like the collapse of the house at the end of the movie, the movie collapses on itself.  Aronofsky reaches too far.

He fails to understand that his successes, like Black Swan and The Wrestler, were his best movies because he controlled his more eccentric auteuristic impulses.  While both were audacious explorations of the human body and pushing oneself to its ultimate limit, audiences respected (and enjoyed) both and were able to tolerate images of extreme bodily harm as a means to a meaningful end.

Audiences will hate it, and they do.  It has the honor of being one of only a handful of movies ever to receive an “F” CinemaScore rating.

This movie was not just made in bad taste, but when stripped away, is really just another liberal Hollywood movie attacking all traditional aspects of society – religion, capitalism, democracy, which Aronofsky believes causes war and terror, and inevitably widespread environmental devastation.

But at its heart, its message fails as it is based on an artist’s subjective reality that most of America does not share, and which is not based on universal objective truths that reveal true beauty, true love, and true compassion that the Lord gives all who ask and seek it.  Patience is a worthy virtue as God does not answer our prayers on our time, but rather on His.

There is evil in this world that is inexplicable and we are right to question why such atrocities can happen.  But we are human, and we are fallen.  We are not meant to understand everything, and while this movie dares us to challenge our beliefs, it miserably fails, and which leaves a sour taste in our mouths (that could easily be the nausea it brought on).

Aronofsky’s “exploration” is arrogant and pretentious at best, and evil at its worst.  I pray for Aronofsky and hope he finds some peace within his soul.  Otherwise, like Her, we are all screaming endlessly to get the hell out of this movie.

If you enjoyed this movie review, make sure to check out our movie review on It, based on Stephen King’s horror novel.