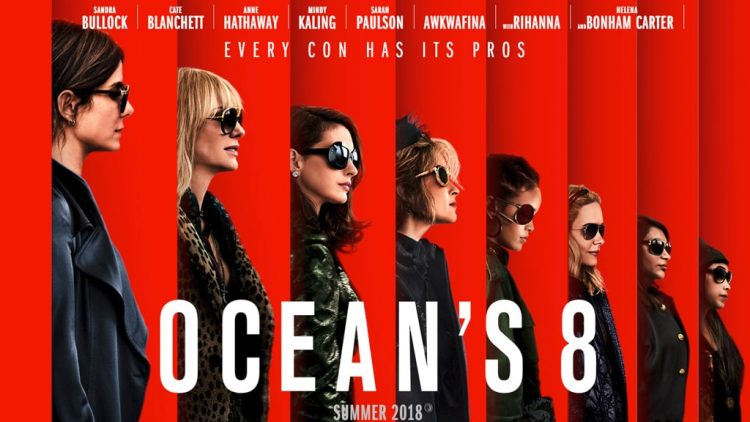 Imagine an “Ocean’s” movie in which there is never any tension, the mastermind recruits total amateurs, camaraderie is largely dependent upon gender, and a key member joins the group because “it would be something fun to share.” Steven Soderbergh was gracious enough not to impose such a film on the world, but director and co-writer Gary Ross of Ocean’s 8 had other plans.

Ocean’s 11 (1960) and its 2001 remake starring George Clooney took place in Las Vegas and dealt with professional thieves seeking cash in a city teeming with mobsters and roughnecks. Characters like Terry Benedict (Andy Garcia) would “kill you — and then … go to work” on the body if the heist went sour. There were stakes for the characters involving physical beatdowns, possible death and jail time . All that has been abandoned with Sandra Bullock’s take as Debbie Ocean (Danny’s sister) in favor of feminist propaganda (e.g., “A ‘him’ gets noticed. A ‘her’ gets ignored.”)

The plot to Ocean’s 8 revolves around a revenge scheme by Debbie against her former boyfriend and art gallery owner Claude Becker (Richard Armitage). His loose lips sent Debbie to the slammer for over five years, which allowed her time to plan a heist at the Met Gala, the New York’s Metropolitan Museum of Art’s annual fashion show. The narcissistic New Yorker is framed for stealing a Cartier necklace valued at $150 million.

The crew is also saved by Nine Ball’s teenage sister’s mastery of science, a corrupt insurance fraud agent, and an “old friend” who happens to be a trapeze artist.

What makes Ocean’s 8 so frustrating is that while its cast is filled with legitimate stars, the script seems to pass on every opportunity to add dramatic tension. Rose gets out of a tight jam because she happens to speak French — and asks to see the coveted Cartier necklace in the sunlight. The team is not turned in because Daphne is “lonely” and wants friends. Constance proves early on that she is willing to steal from the team’s masterminds, but then inexplicably passes when she’s presented an opportunity worth millions.

These days, however, it appears that shoddy scripts are a feature instead of a bug.

A.V Club’s review of the movie states: “Ocean’s 8 did a lot of things well: The main cast included three women of color … and there was a lot of joy to be had in the eight’s friendships. … Not once did I worry that one of the con women would turn on the rest in hopes of securing more money for herself, nor did I ever think they wouldn’t pull it off.”

In short, Ocean’s 8 is the ideal movie for individuals who celebrate creative decisions that historically would sink a film at the box office. It has all the trappings of an “Ocean’s” movie — particularly a funky soundtrack — but its far more interested in showcasing cameos by Anna Wintour and Heidi Klum than it is in a heist that will be remembered as long as Frank Sinatra, Dean Martin and Sammy Davis Jr.

Avoid this movie while it’s in theaters unless you want to see what happens when Hollywood producers fail to learn the lessons demonstrated by 2016’s ill-fated Ghostbusters remake by director Paul Feig.