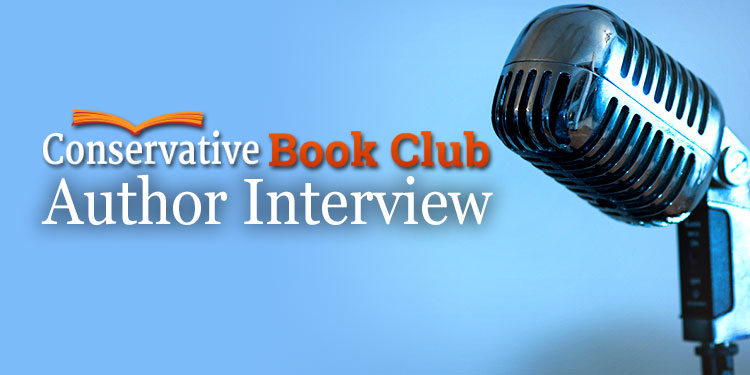 Q: Congratulations on the recent release of Hollywood Traitors: Blacklisted Screenwriters—Agents of Stalin, Allies of Hitler!  Your book was the Conservative Book Club’s Editor’s Pick the other week. Can you give us an overview of the book?

Well, there has been this major myth that hard-core Communists, and by that I mean those with party cards and whose allegiance was to Joseph Stalin and the Soviet Union, never made a major effort to take over the movie industry.  I’m not only arguing that that is flatly false, but they came very close to succeeding.

They were part of a broad cabal of subversives who had penetrated America’s most critical institutions, including our intelligence agencies, the military, the State Department and even the White House, and were assiduously working to betray America’s interests and advance the foreign policy of Joseph Stalin.  It was not, as some would have you believe, a small thing that should be casually shrugged off. Moreover, Hollywood continues to keep celebrating these folks as champions of our Bill of Rights and the U.S. Constitution, when in fact, they were undermining our Bill of Rights and the U.S. Constitution. It’s amazing, really. And Hollywood will do so again this year by releasing a film featuring Bryan Cranston, the star of Breaking Bad, that honors Dalton Trumbo – a major Stalinist screenwriter who claimed to be a great defender of our liberties. It also promises to go after the anti-Communist community, including John Wayne.

By 1944, one has to remember, the American Communists, who viewed the murderous Stalin as their political leader, were deeply imbedded in the Hollywood guilds and unions and even appeared to have control of movie content. The Screen Writers Guild, for instance, was certainly one of the most important Hollywood organizations that was brimming with Stalinists.  The Guild’s major publication, The Screen Writer, was edited by two devoted party members, Dalton Trumbo and Gordon Kahn—Kahn being the Ryskind family’s next-door neighbor–who turned the influential monthly into a Red propaganda organ.

Despite the fact that the Communist party had sunk its teeth into Hollywood, the truth is that anti-Communist institutions and individuals managed to drastically reduce the Red influence from about 1947 until 1960, with the initial 1947 HUAC hearings proving crucial to the weakening of the Hollywood comrades.

Among the heroes, from my perspective, were the House Un-American Activities Committee and the Motion Picture Alliance, which my dad, Morrie Ryskind – a prominent screenwriter who co-authored several Marx Brothers films, helped establish.  Other anti-Communists who created or became members of the MPA included Walt Disney, Ayn Rand, Robert Taylor and John Wayne.   Labor leader Roy Brewer, another MPA member, played the most important role in handing a major setback to the Hollywood Communists.  The producers’ decision to blacklist known Reds from Hollywood also had a healthy impact in diminishing their control of the industry.

I know this is not a politically correct view to hold, but I deeply believe the facts confirm my conclusions.

Q:  That’s amazing that you had a familial connection to all of this!  What takeaways would you like readers to leave with after reading your book?

I’d like them to realize that there was a major Communist threat in America and that party members, loyal to the Soviet Union, had penetrated in heavy numbers our most influential institutions including the movie industry. I’d like them to understand that the famous Hollywood Ten, mostly screenwriters whom Tinseltown continues to elevate as heroes and martyrs to the First Amendment, including Dalton Trumbo, were Communist party members when they testified before HUAC in 1947.

Each and every one of the Ten had a CP card, which meant they were loyal to the Soviet Union, not to the United States.  In that year, the Cold War was already on and even very liberal organizations, like the Americans for Democratic Action, knew that Stalin was a global menace and were barring party stalwarts from membership.

The Soviet despot, in violation of solemn oaths he made to the contrary, had seized Eastern Europe by military force, was endlessly threatening Western Europe with military aggression and subversion and used the Communist parties worldwide to undermine the West’s efforts to check Stalin’s appetite to gobble up free nations.  But Hollywood’s Communist Party members were, as they say these days, still “all in” for the Moscow tyrant.

Q: Some might be shocked this was all taking place during the early part of the Cold War.  Do you believe the Cold War and WWII are accurately being taught in our nation’s schools?

I am not certain about what kids are being taught about World War II.  But judging from what my grandkids tell me, they are certainly not getting a clear picture about the Cold War.  According to them, neither the texts nor the teachers, as a general rule, inform them that the Soviet Union was a major threat to the rest of the non-Communist world, and that the blame for the Cold War—which began in earnest after World War II—lay squarely on the shoulders of Stalin and the Soviet Union.

Nor do they learn that President Truman’s plan to give military aid to Greece and Turkey, launch the Marshall Plan to financially assist Europe, implement the Berlin airlift and create the North Atlantic Treaty Organization were defensive measures, designed to block Stalin from forcibly taking over the free countries in Western Europe.

Q: What books or conservative-themed books, influenced your political philosophy?

Henry Hazlitt’s Economics in One Lesson had a big impact, for there you learned a lot about the importance of free markets, freedom and the creation of wealth. Friedrich Hayek’s, The Road to Serfdom, was another major work that taught me and other conservatives the great dangers of socialism and central planning. F.A. Harper’s booklet, Why Rages Rise, was critical to my belief in free market capitalism. John T. Flynn’s The Roosevelt Myth, gave me unfavorable insights on why FDR’s governing policies prolonged the Great Depression.  Much later, I read Milton Friedman’s critique of Federal Reserve policy during the 1930s and became convinced the economy would have recovered far more quickly without the Feds sharp reduction in the money supply.

Human Events’ Blueprint for World Conquest proved instrumental in shaping my view of Soviet communism and the Communist Party in the United States.  Henry Regnery, the founder of the Regnery publishing house, put together this book for Human Events with an introduction by William Henry Chamberlin, a recognized expert on the Soviet Union.  The book was a translation of the rules of the Communist International, which was headquartered in Moscow, dominated by Stalin and used to control Communist parties worldwide. In black and white, you could read the Communist Party in America, and in other countries, had to be wholly subservient to the Soviet Union or tossed out of the Comintern.  It was my trump card in debates with my more liberal friends in high school and college who maintained there wasn’t any solid evidence that Stalin controlled the American party.

That is very hard to answer.  Human Events, as I think some of your readers will know, became Ronald Reagan’s favorite publication when he was governor of California and remained so when he was President.  Especially in retrospect, I see him as one of our greatest presidents and his two terms the most important political achievement of the Conservative Movement.  He restored the health of our economy with deregulation, supply-side tax cuts and policies that produced the longest economic expansion in peacetime in American history.  He also managed to end the Soviet empire by rebuilding our defenses, denying strategic assistance to the Soviet Union, proposing the Strategic Defense Initiative (SDI) and providing vital military and economic aid to those resisting the Soviet invasion of Afghanistan. And he bested the Evil Empire with virtually no loss of American lives.

This would have been a grand achievement for any president.  As a result of what he accomplished, Bill Clinton, who embraced much of Reagan’s economic program after the Democrats lost both the Senate and the House in those historic 1994 congressional elections, managed to have a very successful presidency. With the Cold War’s demise, courtesy of Reagan, he was able to drastically reduce defense spending, which greatly lessened the burdens on the federal budget.  The defeat of Hillary’s national health insurance program by the Republicans in Congress also resulted in a check on federal spending.

By embracing the successful Reagan welfare reform program in California on a national scale, Clinton managed to put major curbs on the rising costs of welfare as well.  Clinton became business friendly in many ways, pushing through a free-trade agreement and lowering the capital gains tax by 40%.  The federal budget even enjoyed surpluses for several years.  I view these successes as guided by conservative economic policy.

At least at this moment though, I’m slightly on the pessimistic side as to whether conservatives can meaningfully govern again, even if they win the presidency in 2016.  Our stated goals are still the same, meaning a strong national defense, less central planning, a vibrant economy rooted in free enterprise which produces good-paying jobs for America’s citizens, honoring traditional values and securing control of federal entitlement programs.

At this point, I think the Republican Party, the only realistic political vehicle for conservatism, is very much split over how to deal with these critical issues.  The GOP seems quite uncertain on how to rein in entitlements and too often doesn’t do anything meaningful.  And the party is torn on when—or if—we should intervene militarily when friendly nations are threatened by a Putin or an ISIS.  There is also the inexorable demographic problem, with African Americans, Asians, Hispanics and single women solidly in the Democratic camp during the most recent presidential elections.  Can the Republicans find a presidential candidate whose conservative message will resonate with the American people at large and prevent the Democrats in Congress, with major assistance from the media, from sabotaging decent reforms?   I hope so, but, alas, I am not overly optimistic.

Of course, I devoutly wish to be proven wrong.