A History of the American People 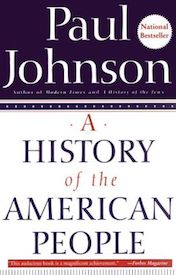 Paul Johnson burst into the front ranks of modern historians in the early 1980s with his remarkable history of the twentieth-century, “Modern Times” — a critically-acclaimed bestseller despite Johnson’s unfashionably conservative perspective. Since then, Johnson has written a half-dozen equally ambitious volumes, continuing to dazzle critics and the reading public alike with his uncanny knack for distilling vast amounts of historical data into a coherent, thrillingly readable narrative.

Now, with “A History of the American People,” Johnson has delivered what, by common consent, is his masterpiece — a single, sweeping volume so awesome in scope, so rich in fascinating detail, and so pulsing with sheer dramatic intensity that it instantly takes its place as the finest one-volume history of our country ever written. Best of all, for Club members, Johnson’s conservative outlook is more in evidence than ever, as he corrects decades of liberal mythmaking on everything from America’s founding principles to the achievements of Ronald Reagan.

Johnson’s history is both a comprehensive account and a bold reinterpretation of American history from the first settlements to the Clinton administration. It covers every aspect of U.S. history — its politics, business, and economics; its art, literature, and science; its society and customs; its traditions and religious beliefs. The story is told in terms of men and women who shaped and led the nation and the ordinary people who collectively crated its unique character — not just presidents and politicians, but pilgrims and pioneers, inventors and innovators, businessmen, soldiers, artists, moviemakers, educators, philanthropists, religious leaders, and countless others. Whereever possible, letters, diaries, and recorded conversations are used to ensure a sense of actuality.

Johnson’s history emphasizes the role of religion in American history and how early America was linked to England’s history and culture. John Winthrop, Roger Williams, Anne Hutchinson, Cotton Mather, Benjamin Franklin, Tom Paine, Washington, Adams, Jefferson, Hamilton, and Madison are presented in a fresh perspective. There are incisive portraits of Jackson, Chief Justice Marshall, Clay, Lincoln, and Jefferson Davis. Johnson shows how Cleveland and Teddy Roosevelt ushered in the age of big business and industry and how Woodrow Wilson revolutionized the government’s role. He has new — and sure to be controversial — views of Harding, Coolidge, Hoover, FDR, Truman, Eisenhower, Kennedy, Johnson, Nixon, Reagan, and Bush.

(Even more remarkable? He delivers, in spades)

Paul Johnson, in his preface: “Writing a history of the American people, covering over 400 years, from the late 16th century to the end of the 20th, and dealing with the physical background and development of an immense tract of diverse territory, is a Herculean task. It can be accomplished only by the ruthless selection and rejection of material, and made readable only by moving in close to certain aspects, and dealing with them in fascinating detail, at the price of merely summarizing others. That has been my method, as in earlier books covering immense subjects, though my aim nonetheless has been to produce a comprehensive account, full of facts and dates and figures, which can be used with confidence by students who wish to acquire a general grasp of American history. The book has new and often trenchant things to say about every aspect and period of America’s past, and I do not seek, as some historians do, to conceal my opinions. They are there for all to see, and take account of or discount. But I have endeavored, at all stages, to present the facts fully, squarely, honestly, and objectively, and to select the material as unpretentiously as I know how.”

“A formidable achievement … and an indispensable corrective for some of the brain-dead America bashing that has infected too much of contemporary thinking. Mr. Johnson’s lively balanced history is informed on every page by his undisguised love for the United States.”— Michael Medved, author, Hollywood vs. America

“As majestic in its scope as the country it celebrates. [Johnson’s] theme is the men and women, prominent and unknown, whose energy, vision, courage and confidence shaped a great nation. It is a compelling antidote to those who regard the future with pessimism.”— Hentry A. Kissinger, Former Secretary of State

“The most pro-American history of the United States to be written in my adult lifetime. Every American who loves his or her country and wants to better understand it should read Paul Johnson’s book.”— Newt Gingrich

“Historian Johnson’s reevaluation of the American experiment must rank among the fullest, liveliest, most opionated single-volume histories of the United States … with the same high drama he brought to Modern Times … a history unrivaled for sheer readability.”— Publishers Weekly

For Depth, breadth and readability, no other U.S. history comes close

Paul Johnson divides his sweeping history into eight parts, comprising every important event and personality from America’s colonial beginnings to her troubled present. A peek at the Table of Contents:

Europe and the transatlantic adventure 8 Raleigh, the proto-American, and the Roanoke disaster * Jamestown: the first permanent foothold * Mayflower and the Formative Event * the Natural Inheritance of the Elect Nation * John Winthrop and his ‘little speech’ on liberty * Roger Williams: the first dissident * The Catholics in Maryland * The primitive structure of colonial America * Carolina: the first slave state * Cotton Mather and the end of the Puritan utopia * Oglethorpe and early Georgia * Why colonial control did not work * The rise of Philadelphia * Elected assemblies versus the governors * the Great Awakening and its political impact

‘That the Free Constitution be Sacredly Maintained’:

George Washington and the war against France * Poor quality of British Leadership * The role of Benjamin Franklin * Thomas Jefferson and the Declaration of Independence * The galvanizing effect of Tom Paine * Washington , the war and the intervention of Europe * Patriots and loyalists: America’s first civil war * The Constitutional Convention * The ratification debate * Citizenship, the suffrage and ‘the tyranny of the majority’ * The role of religion in the Constitution * The presidency, Hamilton and public finance * Success of Washington and his Farewell Address * John Adams and the European War * Central importance of John Marshall * Jefferson’s ambivalent rule and character * The Louisiana Purchase * Madison’s blunders and their punishment * Andrew Jackson, the deux ex machina * Jackson and the destruction of the Indians

High birth-rates and the immigrant flood * the market in cheap land * Spread of the religious sects * Emergence of the South and King Cotton * The Missouri Compromise * Henry Clay * The advent of Jacksonian democracy * The war against the Bank * America’s agricultural revolution* Revolution in transportation and communications * Polk and the Mexican War * De Tocqueville and the emerging supernation * The ideology of the North-South battle * Emerson and the birth of an American culture * Longfellow, Poe and Hawthornian psychology

Huddled Masses and crosses of Gold:

Modern American and its aging process * Mass immigration and thinking big * Indians and settlers, cowboys and desperadoes * the ‘significance of the frontier’ * Centrality of the railroads * Did the Robber Barons really exist? * Carnegie, steel and American philanthropy * Pierpoint Morgan and Wall Street * Trusts and anti-trusts * Monster cities: Chicago and New York * The urban rich and poor * American science and culture: Edison and Tiffany * Church, Bierstadt, and the limitless landscape * Bringing luxury to the masses * The rise of labor and much raking * Standard Oil and Henry Ford * Populism, imperialism, and the Spanish-American War * Theodore Roosevelt and his Golden Age

The significance of Woodrow Wilson * Education and the class system * The advent of statism * Wilson’s legislative triumph * McAdoo and the coming of war * The disaster of Versailles and the league of Nations * Harding, ‘normalcy’ and witch-hunting * Women stroll onto the scene * Quotas and internal migration * The Harlem phenomenon and multiracial culture * Fundamentalism and Middle America * Prohibition and its consequences * San Francisco, Los Angeles, and Californian extremism * Cheap electricity and its dramatic impact * Hollywood * the social and moral significance of jazz * Race, prejudice, popular entertainment and downward mobility * Harding and historical deconstruction * The age of Coolidge and governmental minimalism * Twenties cultural and economic prosperity

‘Nothing to Fear But Fear Itself’:

Government credit-management and the Wall Street crash * Why the Depression was so deep and so long-lasting * The failure of the Great Engineer * Roosevelt and the election of 1932 * the mythology of the New Deal * FDR, big business, and the intellectuals * Transforming the Democrats into the majority party * U.S. isolationism and internationalism * Roosevelt, the Nazis and Japan * American in the was, the miracle in production * FDR, Stalin, and Soviet advances * The rise of Truman and the Cold War * Nuclear weapons and the defeat of Japan * The Truman Doctrine, Marshall aid, and NATO * America and the birth of Israel * The Korean War and the fall of MacArthur * Eisenhower, McCarthyism, and pop sociology * Piety and the Potomac

‘We Will Pay Any Price, Bear Any Burden’:

The radical shift in the media * Joe Kennedy and his crown prince * The 1960 election and the myth of Camelot * the Space race * The Bay of Pigs and the missile crisis * Lyndon Johnson and his Great Society * Getting into Vietnam quagmire * Nixon and his silent majority * Civil rights and campus violence * Watergate and the putsche against the Executive * Congressional rule and America’s nadit * Carter, the 1980 watershed and Reaganism * Rearmament and the collapse of Soviet power * the Bush interlude and Clintonian corruption * Fin-de-siecle America and its whims * Wyeth and the significance of the realist revival * Judicial aggression and the litigational society * The sinister legacy of Myrdal * Language, abortion, and crime * Family collapse and religious persecution

Tags: A History of the American People, Paul Johnson