Conservative Book Club » Bestsellers » And the Good News Is…: Lessons and Advice from the Bright Side

And the Good News Is…: Lessons and Advice from the Bright Side 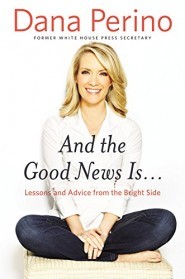 Dana Perino’s first book, And the Good News Is… Lessons and Advice from the Bright Side, is barnstorming the bestseller list.  Perino, the first female Republican White House Press Secretary and a Fox News political analyst on The Five, tells the story of how she went from being a college country radio DJ to a White House Press Secretary during President George W. Bush’s administration.

And the Good News Is… chronologically follows Perino’s life, focusing on her career and the people who supported her on the journey to the bright side.  Perino writes her book as a customized guide for young woman professionals about how to get through what she calls a “quarter-life crisis.”  Perino counsels that the solution to such a crisis is finding a place and mindset where the mind and body are harmonious – loving what you do while also being with those you love and taking care of yourself.  For Perino personally, the bright side is living in New York as a political analyst and enjoying time with her husband, Peter, and her dog, Jasper.

For Perino, a self-described eternal optimist, the good news is that “nothing is ever as bad as it seems,” and that sometimes you are not supposed to turn down the road you outlined on the map.  Throughout every section of her book, Perino gives advice to young professionals about always challenging themselves and never hesitating to adjust their lives or to move on when necessary.

Perino can attest to this.  In chapter two, “Love at First Flight,” Perino was at what she considered to be the height of her career when her heart was swept away by a man she sat next to on a plane.  A few months later, she quit her job on Capitol Hill to move to London with him.  If it weren’t for Perino’s risk-taking, she may have never met her husband, Peter, who was the man on the plane.

Perino passes on the wisdom that life picks up when you least expect it.  In chapter 3, “Stepping Up to the Podium,” Perino writes that toward the end of the Bush Administration, her health was deteriorating and her marriage was suffering from the never-ending responsibilities of her job.  Perino writes:

“The day I learned about becoming the next White House Press Secretary was the day I planned to resign from the White House.”

Although the book would have benefited from weaving Perino’s advice and personal stories together throughout the book, Perino writes about a wide range of topics and it is useful for chapters to be dedicated to one theme. Some may be disappointed that Perino only wrote a page and a half about why she is a conservative–instead, she is clear, concise and effective in explaining her political ideology.

Above all, Perino shows her readers a side of President George W. Bush that many Americans did not get to see on national media.  Perino showcases President George W. Bush’s humor, humility and honesty by recounting some of their conversations and interactions.  He became a mentor and father figure to her. Although at times it felt as if Perino wrote as the president’s press secretary rather than as herself, it is apparent that their loyalty toward each other is unfaltering–it would be unfair to hold that against her.

The good news about Perino’s book is that readers get an all in one deal.  It contains her life story, her career journey, experiences with President George W. Bush and life advice.  For now, young professionals can rest assured that there is a bright side.

Tags: And the Good News Is, Dana Perino, Fox News