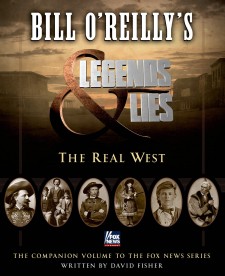 In his introduction to Legends & Lies, Bill O’Reilly writes, “History can be thrilling, and America’s past is full of tremendous characters whose exploits can enrich our own lives today.  It took me a while to convince my students of that, but I did it…”  And, indeed, he and author David Fisher have done it again.  Legends & Lies tells true stories about legendary figures of the Wild West.  But one could come to the conclusion that the entire era was less legend and more Greek tragedy.

O’Reilly and Fisher have created a modern day text book, but one that focuses on the details of individuals whose stories encapsulate the larger historical context.  From the megalomaniacal Colonel Custer to the tragic Wild Bill Hickok, Kit Carson, and the humorous Black Bart, the stories of these figures are far more morally complex and interesting than the short-shrift treatment they receive in the media and classrooms today.

The western expansion of the United States and the subsequent decimation of Native Americans is often painted morally black and white in modern culture, and the figures that aided this expansion often receive the same black and white judgement.  However, these characters prove much more ambiguous than what we are taught in school.

Oftentimes, due to the lack of information and sources, mystery is left surrounding some of those individuals’ most infamous decisions.  Kit Carson, one of the most intriguing figures in the book, was a man who had grown up with Native American tribes, spoke their languages, married into the tribes and pressured politicians to end the subjugation of native lands.  But towards the end of his life he oversaw the “Long Walk,” which saw the death of hundreds of captured Native Americans as they were marched to their newly appointed reservation.

While he originally resigned from the military in protest over their treatment, he was somehow convinced to stay on.  His decision saw him vilified in both Native American and popular history.  It was strange, enigmatic, and tragic.

The image of the Wild West taken from the pages of Legends & Lies is less John Wayne and more HBO’s Deadwood.   The characters are morally ambiguous, complex, integral parts of a culture whose destiny was undeterminable.  Many started their careers as abolitionists fighting against slave owners only to turn their services over to the military in fighting the plains Indians and wiping out the buffalo.

One small criticism of the text is that the book almost seems to engage in the very myth which it is trying to expunge, occasionally offering moralizations for leading figures that may not deserve it (i.e. Custer), but the facts seem to speak for themselves.

Life was nasty, brutish and short – to paraphrase Hobbes – and by placing the reader in the time, place and context, one comes to empathize with these men and women and their history with all its complexity, ingenuity, bravery and fragility.