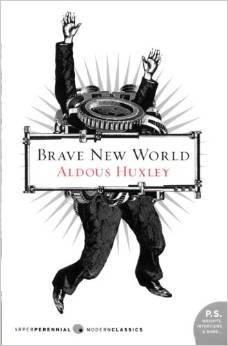 Dignity, beyond all else, has attended the creation of the classic Utopias, from that of Plato on down to Edward Bellamy’s perfectly geared industrial machine. Conceived in kindliness of spirit, dedicated to the high future of the race and offered with becoming humility as contributions to the questionable science of human happiness, these classic Utopias have only too often seemed mere parodies of the Napoleonic State, the Taylor system of the laboratory where guinea pigs are bred to predestined fates. It has remained for Aldous Huxley to build the Utopia to end Utopias — or such Utopias as go to mechanics for their inspiration, at any rate. He has satirized the imminent spiritual trustification of mankind, and has made rowdy and impertinent sport of the World State whose motto shall be Community, Identity, Stability.

This slogan, Mr. Huxley seems to be saying under the noise made by his knockabout farce, is thoroughly unbiological. Mankind moves forward by stumbling — we almost said progressing — from one unstable equilibrium to another unstable equilibrium; and if the human animal ever ceases to do this he will go to the ant (the sluggard!) and become a hived creature. Mr. Huxley doesn’t like the prospect. So here we have him, as entertainingly atrabilious as ever he was in ”Antic Hay” or ”Point Counter Point,” mocking the Fords, the Hitlers, the Mussolinis, the Sir Alfred Monds, the Owen D. Youngs — all who would go back on laissez-faire and on toward the servile state. His Utopia has much in common with those of the nineteenth century — everything, in fact, but their informing and propulsive faith. It is as regimented as Etienne Cabet’s Icaria, the communal Utopia seemingly made of breeding the bureaucracy of the first Napoleon with the ghostly positive of August Comte; and its ideas of dispensing panem et circenses to the populace are precisely those of Edward Bellamy’s ”Looking Backward” — only Mr. Huxley, who has had the opportunity to visit moving-picture emporium and radio studio, knows the difference between possibility and actuality in popular entertainment. With the Highland Park and River Rouge plants, the Foster and Catchings ideology of consumption, the Five-Year Plan, the synthetic creation of vitamins, the spectacle of a chicken heart that lives on without benefit of surrounding chicken, the flight of Post and Gatty and the control of diabetics all behind him in point of time, Mr. Huxley has had an easy task to turn the nineteenth century hope into a counsel of despair. And like an older utopian, Mr. Huxley finds no room for the poet in his Model T. world. His poets are all Emotional Engineers.

Behold, then, the gadget satirically enshrined. As Bellamy anticipated the radio in 1888, Mr. Huxley has foreseen the displacement of the talkie by the ”feelie,” a type of moving picture that will give tactile as well as visual and aural delight. Spearmint has given way to Sex Hormone gum — the favorite chew of one of Mr. Huxley’s minor characters, Mr. Benito Hoover. Grammes of soma — a non-hangover-producing substitute for rum — are eaten daily by the populace; they drive away the blues. God had dissolved into Ford (sometimes called Freud), and the jingle goes ”Ford’s in his flivver, all’s well with the world.” Ford’s book, ”My Life and Work,” has become the new Bible. The Wurlitzer has been supplemented by the scent organ, which plays all the tunes from cinnamon to camphor, with occasional whiffs of kidney pudding for discord. Babies, of course, are born — or rather, decanted — in the laboratory; and by a process known as the Bodanovsky one egg can be made to proliferate into ninety-six children, all of them identical in feature, form and brain power. The Bodanovsky groups are used to man the factories, work the mines, and so on; there can be no jealousy in a Bodanovsky group, for its ideal is like-mindedness. But if there is little jealousy in Mr. Huxley’s world, there is still shame; a girl blushes to think of having children in the good old viviparous way. To obviate the possibility of childbirth, the girls — or such of them as are not born sterile Freemartins — are put through daily Malthusian Drill in their impressionable ‘teens. Buttons have disappeared and children play games of ”Hunt the Zipper.”

We are introduced at the outset to the Director of Hatcheries and Conditioning for Central London, who takes us through his plant and explains the creation of the various castes: Alphas, Betas, Gammas, Deltas and Epsilons, each caste ranging from minus to plus. Before a child is turned over to his station in life, he is thoroughly conditioned, by injection of hypnopaedic wisdom during sleep, to like precisely what he has to like. But slips there are, even in the most mechanical of all possible worlds, and owing to some oversight — possibly the spilling of alcohol into the blood surrogate upon which he was fed in his prenatal days — Bernard Marx, Mr. Huxley’s hero, is dissatisfied.

Bernard loves Lenina Crowne in a sort of old-fashioned romantic way. He longs for solitude a deux. So with her he takes the rocket for a vacation in the New Mexican savage reservation. By sheer coincidence, the Director of Hatcheries and Conditioning for Central London had spent a vacation once upon a time in this reservation; and had lost his girl, a Betaminus, in a sudden and confusing desert thunderstorm. Bernard, of course, runs upon the girl — now an old woman — and her son, John, the Savage, born viviparously. Quickly he gets into touch with Mustapha Mond, his Fordship, the Resident Controller for Western Europe. Shall be bring them back by rocket to London? His Fordship thinks furiously and decides in the positive; and for the sake of educating the populace, the Savage and his Mother are shot over to England.

It is Mr. Huxley’s habit to be deadly in earnest. One feels that he is pointing a high moral lesson in satirizing Utopia. Yet it is a little difficult to take alarm, for, as the hell-diver sees not the mud, and the angle worm knows not the intricacies of the Einstein theory, so the inhabitants of Mr. Huxley’s world could hardly be conscious of the satirical overtones of the Huxleyan prose. And the bogy of mass production seems a little overwrought, since the need for it as religion, in a world that could rigidly control its birth rate and in which no one could make any money out of advertising and selling, would be scarcely intelligible even to His Fordship. Finally, if Mr. Huxley is unduly bothered about the impending static world, let him go back to his biology and meditate on the possibility that even in laboratory-created children mutations might be inevitable. A highly mechanized world, yes; but it might breed one Rousseau to shake it to the foundations and send men back to the hills and the goatskins. Meanwhile, while we are waiting for ”My Life and Work” to replace the Bible, ”Brave New World” may divert us; it offers a stop-gap.