The Clash of Orthodoxies: Law, Religion, and Morality in Crisis 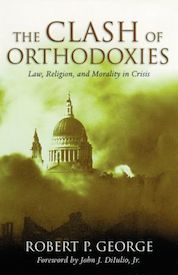 Here’s the problem for religious believers, as most of America’s intellectuals see it: In a democracy, the only way we can do politics is by rational discourse–which is to say, the things we claim about law and morality must be defended on rational grounds and have their origin in reason, not prejudice or irrational commitment. But religious beliefs are, by their very nature, irrational commitments (and often prejudiced, besides). However well one presents an argument against, say, cloning, its only possible origin is a divine revelation that admits no rational defense. And so public laws–even the apparently reasonable ones–that echo religious believers’ opinions must be overturned, and believers–even the apparently reasonable ones–must be excluded from public discourse.

Faced with this assault, religious thinkers have tended in one of two directions. The first admits that believers are irrational–but then claims that so are secularists: There is no such thing as reason divorced from all irrational commitments; secularism is just as much a sect as any religion. The second grants the demand that reason rule public discourse–and then claims that a large set of religious believers’ moral claims are perfectly rational in origin, born of the human reason that God Himself created in us.

These options may look contradictory, but along comes Robert P. George to seize both: Rationality is the sole ground of public discourse, and secularism is deeply irrational. If we’re going to start excluding people from our political deliberations, nonbelievers are the ones who are going to have to go, for rationality itself gives us insights into natural law–self-evident truths–that religious believers are trying to represent in politics and public morality.

IT’S AS big a claim for religion as America has seen in a long time and made even bigger by the fact that it is an entirely philosophical, not religious, argument. But George has been putting it for several years in essay after essay, on topic after topic. And now in “The Clash of Orthodoxies: Law, Religion, and Morality in Crisis” he’s collected those essays in a powerful and important volume.

That’s not to say he has no critics. Deep in the weeds of natural-law theory, there are battles going on between adherents of the various camps, and some of George’s sternest opponents are his fellow Catholics, such as the American philosopher Russell Hittinger, who reject the anti-theological line of natural law George adopted from the British theorist John Finnes.

Curiously, George has been well rewarded by soft leftists for his hard-line work on the right. Who among conservative intellectuals holds a position as distinguished as Robert George’s McCormick Chair of Jurisprudence at Princeton University, a chair hallowed by its former holder, Woodrow Wilson? His books–particularly his 1995 “Making Men Moral”–are widely reviewed and argued about, and he is the opponent of choice when public debates are arranged at Princeton. Even conservatives have begun to recognize his work: George has recently found funding to establish the Madison Program at Princeton, and he’s been appointed a member of President Bush’s council on bioethics, headed by Leon Kass. It’s a long way to have come for a West Virginia lawyer, even if he did happen to go to Harvard and Oxford.

SOME of the essays in “The Clash of Orthodoxies,” such as “The Political Theory of the Culture of Death” and “Same-Sex Marriage and Moral Neutrality,” take up specific moral issues of pressing concern. Others, such as “God’s Reasons” and “The Concept of Public Morality,” argue at a more general level for George’s views of jurisprudence and political theory. But all the essays are aimed at a nontechnical audience, and in them the reader gets to watch a fascinating mind at work: brilliant, of course, and learned, but, above all, tenacious. Robert George is the bulldog of American intellectuals–grasping hold of a topic and refusing to let it go until he’s gotten to the bone.

Book review from The Weekly Standard, written by Joseph Bottum.