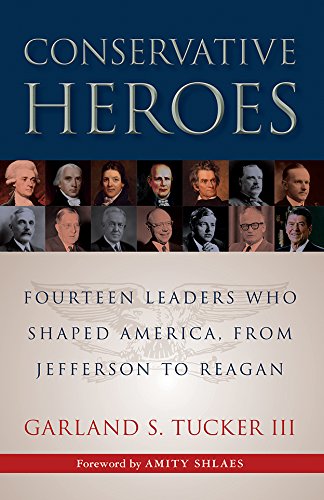 In an upcoming new book (to be published in June), Conservative Heroes (ISI Books), Garland Tucker not only verifies what you thought you knew about American conservative political philosophy, but also tells you much you don’t know. Tucker approaches his subject through the lives of 14 leaders, some familiar and others not so well known.

This is the kind of book that is missing from our high schools and colleges. It’s of particular interest because it shows that academic historians are missing so much that is important. Tucker’s most amazing accomplishment is making an often abstruse subject a good read, a real compliment since he is not an academic but chairman of a publicly traded specialty finance company.

Tucker explains that conservatism was originally labeled classical liberalism, the “belief in the maximum of personal freedom consistent with the maintenance of order.” By the 1930s and New Deal intervention into privacy, the name liberalism was appropriated and re-defined as a doctrine designed to  increase centralization of federal power under the false flag of achieving justice and equality. In other words, as the polar opposite of the original term “liberal,” which spurned government intruding into the sanctity of individual freedom.

Despite courageous efforts by a “faithful band” of conservatives, from Thomas Jefferson and James Madison at the founding of the Republic, to William F. Buckley, Barry Goldwater, and Ronald Reagan in the modern era, the new liberals have dominated political theory since the Depression era, establishing themselves as nanny-state advocates. In contrast, conservatives have consistently represented  common sense in government, privacy, property and individualism. Tucker recounts the schism clearly, and from the vantage of heroic people who have kept the conservative flame burning brightly under great duress. Economic historian Amity Shlaes accurately compares Tucker’s structure to John F. Kennedy’s Profiles In Courage, which depicted U.S. senators displaying  moral courage in the face of intense political pressure.

Tucker noticed holes in the coverage of  conservative history, leading him to write the highly praised The High Tide of American Conservatism, which points out the historic importance of the 1924 presidential race between Calvin Coolidge and John W. Davis (both candidates were, in reality, conservatives; thus the title). Tucker’s writing is clear and concise in both books, and his ability to recognize a subject missed by academic historians reserves a special place for Tucker in the pantheon of political authors. Conservative Heroes should be required reading in high schools and colleges.

This review was originally written by Bernie Reeves for the Phi Beta Cons blog at National Review Online.