The Death of the Grown-Up 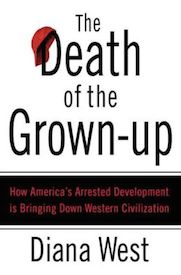 Once upon a time, in the not-too-distant past, childhood was a phase, the concept of “adolescence” did not exist, and adulthood was the fulfillment of youth’s promise. No more. Yesterday’s ideal of responsible adulthood has given way to today’s “eternal adolescent,” typified by middle-aged guys playing air guitar and “Moms Who Mosh.” How that transformation happened — and how it weakens our society in a time of terrorism and war — is the subject of Diana West’s “The Death of the Grown-Up,” a provocative look at the rise of youth culture, the worship of perpetual adolescence, and the sorry spectacle of adults shirking the responsibilities of maturity.

“Is there a single adult left anywhere?” asks West, the firebrand conservative columnist for the Washington Times. Apparently not — and the disease that killed them she explains, was incubated in the Sixties to a rock-and-roll score, took hold in the seventies, and, with the help of multiculturalism, left us with a generation that can’t say “no” — to their children or themselves. From the inability to nix a sixteen year-old’s request for Marilyn Manson concert tickets to offering adolescents parentally-funded motel rooms on prom night, to making excuses for Islamic terrorists, West sees us a nation of eternal adolescents who increasingly can’t decide make moral judgments or distinctions — even when confronted with something as manifestly evil as Islamic terrorism. The end result of this “infantilization,” she warns, may be the abject surrender of liberty to implacable authority in the form of Islamic tyranny. “Eternal youth is proving fatal,” she warns; “it is time too find our rebirth in adulthood” — and in The Death of the Grown-Up she points the way.

“Diana West’s analysis of American culture and society is filled with sharp insights and critical judgments that are illuminating and provocative. The Death of the Grown-up delivers an honest perspective on the many forces and pressures challenging 21st century Americans.” —Lou Dobbs, CNN

“The most intriguing question about American culture today — even more intriguing than, ‘When and why did men start to hug each other?’ — is the question Diana West tackles in this penetrating and witty book: ‘When and why did Americans decide to stop growing up?’ Actually, I have a depressing feeling that the two questions are related.” — George F. Will

“With keen wit and unparalleled insight, Diana West traces the national decline of adulthood and the rise of the permanent adolescent class in American life. West administers an overdue spanking to the cultural relativists: Wise up or we will all pay dearly.”—Michelle Malkin

“A brilliant book that devastatingly dissects our politically correct society. In a book that will be read for generations, Diana West has written one of the most important books on our culture, politics and society that I have ever read. A must read for anyone who wants to understand why, all too often, many in the West are apologetic when confronted with the excesses of radical Islam and what we need to do to win the war on terror. This is a phenomenal book that will truly alter the way you view society. It is masterful.”—Steven Emerson, author of “AMERICAN JIHAD: The Terrorists Living Among Us”

“A vigorously argued, far-reaching and timely book which should be read especially by those content to drift along with the noxious tide of fashion.”—Paul Johnson

“Diana West’s brilliant and irreverent skewering of America’s fixation on youth is a wake-up call for every individual who wants to see Western civilization endure. West makes the provocative case that a mass cultural obsession with perpetual adolescence has eliminated adulthood from the human experience, leaving our society effectively undefended as we confront the challenges ahead, especially the menace of Islamofascism.”— Tony Blankley, author of “The West’s Last Chance”

“A book not to be missed by anyone concerned about the future of America and the West.? With wide-ranging scholarship and a lucid and sprightly prose style, she chronicles and analyzes the unprecedented transfer of cultural authority from adults to teenagers. The unhappy consequences range from the obliteration of traditional standards in almost all areas of life to a multicultural relativism that lowers our defenses against elements of a civilization that would destroy us.? West has mounted a much-needed counterattack in the service of Western values and common sense.” — Judge Robert Bork

Tags: Diana West, The Death of the Grown-Up