Excuse Me, Professor: Challenging the Myths of Progressivism 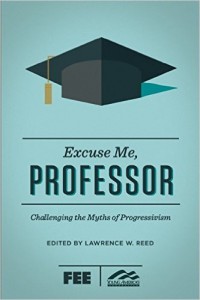 Progressivism is powerful on college campuses. It should be asked: do we know how to prepare students to be able to identify when a progressive myth is being presented as fact? And how do we teach young Americans how to respond to this deceptive and discouraging rhetoric?

The Foundation for Economic Education (FEE), in partnership with the Young America’s Foundation (YAF), set out to better equip all of us to identify and push back on the myths of progressivism in Excuse Me, Professor: Challenging the Myths of Progressivism. The book’s editor and co-author, Lawrence Reed, the president of FEE, explains the “magic” of this project in an interview with CBC, saying,

The magic of the book is that though the title suggests it is intellectual ammunition for students, it really has a broad audience. You can be a relative new-comer to these issues and find it valuable, or you could be a student who identifies as a conservative or libertarian but are not equipped to discuss all of these different issues.

The other part of the book’s magic is that it is useful for anybody of any age who wants to know how to answer these progressive attacks. You could be a retired concerned citizen wanting to write letters to the editor of your local paper, or you could be a career policy worker who wants some short thoughts on how to discuss these issues with your peers.

This volume includes 52 essays, many of which are brand new and address current issues, but it also includes other, timeless classics from two classic FEE publications that YAF helped distribute in the past: Clichés of Politics, published in 1994, and the more influential Clichés of Socialism, which made its first appearance in 1962.

While these essays cover a wide range of topics, including free enterprise, income inequality, and limited government, there is a logic to their order in the book. The beginning essays deal with basic philosophical questions such as equality, greed, rights, and freedom. The essays then move into economic history, helping readers to understand major events their outcomes. Reed drew particular attention to a couple chapters, saying, “I want readers to know that the great depression was not the fault of the free market. You still hear this misconception taught in classrooms like fact, and it just isn’t true… [and] I’m perhaps most proud of the chapter about Upton Sinclair’s The Jungle – many students are told that it was not fiction, but that it was fact.”

The book also features excellent emerging authors including Dr. Anne Bradley of the Institute for Faith, Work & Economics, who wrote a chapter rebutting the cliché that “free markets exploit women.” Bradley’s work also shows up in the essay written by Reed debunking the myth that “Jesus Christ was a progressive because he advocated income redistribution to help the poor.” According to Reed, there is a significant portion of the progressive left that argues from a Christian perspective.  “I didn’t think we could have book dealing with progressive myths that didn’t touch on that prominent argument,” he said.

In all, this book is a worth-while investment because it saves a reader from needing to buy 50 books on the more than 50 topics this book addresses. If you want just enough information to understand and speak knowledgeably about an issue, each of the chapters and authors in this volume provide satisfying yet digestible explanations.

However, Reed is quick to point out that it is not an encyclopedia, but rather a much more entertaining read. I heartily agree that many chapters will bring a smile to your face as many of the arguments use humor and, at times, are quite pointed. While it is a far superior read than an encyclopedia, once you have read it, you will value it as a reference book on these topics for years to come.
Original CBC review by Jacqueline Isaacs. Mrs. Isaacs is the Fellow in Strategic Communication at the American Studies Program. She holds an MBA in Marketing from the Johns Hopkins University Carey Business School, and has worked in marketing communications for a variety of DC-area nonprofits.