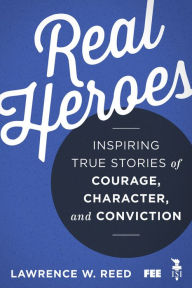 What makes someone a hero?

Despite what our culture typically celebrates, none of those things makes a hero.

No, heroism springs from character, the critical element that defines a person. The good news is that character is something every one of us can mold; it is simply the sum of the choices we make as we face new challenges and opportunities.

And here’s even better news: this lively, accessible book gives you real, flesh-and-blood models of character, courage, and conviction—men and women you won’t just admire but also can emulate.

Author Lawrence W. Reed ranges far and wide in Real Heroes—from major historical figures to remarkable people you’ve never heard of; from the distant past to the present; from the United States, to Europe, to Asia; from statesmen to scientists, athletes to inventors, entrepreneurs to theologians, writers to teachers. Reed’s heroes include:

Concise and compelling, Real Heroes highlights memorable quotations from each hero and features a bulleted summary of lessons at the end of each profile.

We desperately need more heroes today. America is a country with a proud history of heroes, but now it seems we’ve forgotten more of them than we’re producing.

It’s time to change that. And Real Heroes is here to help.