Hitler’s Religion: The Twisted Beliefs that Drove the Third Reich 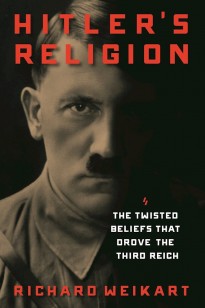 Hitler’s Religion is a systematic look at Hitler’s privately and publically stated beliefs by Dr. Richard Weikart, a professor and author who specializes in modern Germany and European thought and history. Deciphering Hitler’s religious beliefs is a complex task because of the myriad of contradictory statements he made on religion over his life, particularly during his time as Fuhrer.

Those who are familiar with philosophy and religion will find that Weikart over-makes his case. Those who prefer fiction will find him long-winded. Neither of these criticisms mean this book isn’t worthwhile. Meticulously documented, Weikart makes a strong case against Hitler adhering to Christianity, atheism, and occultism – all popular options. Weikart clearly draws the line between taking someone at their word and weighing it against the whole of spoken & written evidence.

The view that Hitler was a pantheist (or panenthiest) is not a widely argued perspective, but it is one that Weikart argues well. Using primary sources like Hitler’s memoirs and speeches as well as documented conversations with and “secret speeches” by Hitler recorded by associates, friends, and secretaries, Weikart wades through a huge amount of material. At the end of the book, Weikart notes how he does not use sources whose reliability is questionable, unless a point is roundly supported by reliable documents. He also notes that in many cases he read the original German himself to make sure an accurate representation of Hitler’s beliefs was given. Once or twice in the book he waxes on about a passage where he takes a less popular stance of a translation. He details why some people think his translation is wrong, but provides much evidence to support his own view. This is an instance where he might overargue or overprove his point, but this is an academic work and those are not always concise.

Weikart also takes a little time to go over how Hitler, religion, and morality intersected, which is a very important aspect of the discussion that should not be overlooked. That particular chapter seems to be splitting hairs since he claims Hitler’s religion did not provide him with transcendent morality – yet he argues at length that nature is Hitler’s god and anything working toward furthering the survival of the strong is inherently moral. It’s a tricky position and one in which Weikart falls a little short in the one chapter he dedicates to the task.

In the end, the book’s strength is its weakness – the copious proofs. The documentation supporting Weikart’s arguments is admirable and enthralling to those in the right field, but drudgery to those who want a readable layman’s version. This is an academic work. It is not a novel style working through Hitler’s mind & beliefs. If you don’t like reading scholarly works, read the introduction and conclusion – they hit his main points without the massive amount of detail and documentation provided as supporting evidence in the chapters. If you need further convincing or are into history and factual argumentation, the whole book is well worth a read.

Whether you want the summary argument from the introduction and conclusion or you are in it for the haul, this is a book worthy of your time. Hitler has been dead for the better part of a century and debate still rages about what his religious beliefs were. Weikart makes an important contribution to the discussion and likely provides the most comprehensive view we will see of Hitler’s Religion.