John Dewey and the Decline of American Education 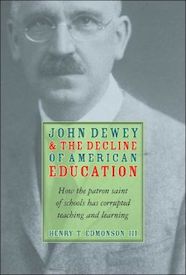 Most conservatives agree that American public schools are a mess, and favor various political and constitutional remedies. But until the deep flaws in American educational philosophy are confronted, argues Henry T. Edmonson III, efforts in the political and constitutional arena are likely to continue to fail. Those flaws are largely attributable to the influence of John Dewey, the progressive turn-of-the-century reformer whose impact on American education is incalculable. Now, in “John Dewey and the Decline of American Education,” Edmondson explains Dewey’s ideas, shows how they have transformed American education for the worse.

Edmunson begins with an account of the startling authority with which Dewey’s fundamental principles have been — and continue to be — received within the U.S. educational establishment. He then shows just how revolutionary these principles are in light of the classical and Christian traditions. Finally, he demonstrates that Dewey has had an insidious effect on American culture and morality through the baneful impact his core ideas have had in our nation’s classrooms.

“Convincingly demonstrates that we cannot come close to understanding why our public education is in such a wretched state without examining John Dewey’s philosophy. But Edmondson’s probing analysis points beyond this to the degenerative effects of Deweyism on our culture. As he shows, Dewey well understood that fundamental changes affecting virtually every aspect of our way of life, including the moral norms of society, can be accomplished most rapidly and effectively through a ‘proper’ education. Because Deweyism still thrives in the schools of education on our college campuses across the country, I cannot overstate the significance of this work.” —George W. Carey, Georgetown University

“One puts this book down with the conviction that unless control of primary and secondary education is wrested from the U.S. educational establishment, corrective measures are not likely to occur.” —Jude P. Dougherty, The Catholic University of America