Miracles: What They Are, Why They Happen, and How They Can Change Your Life 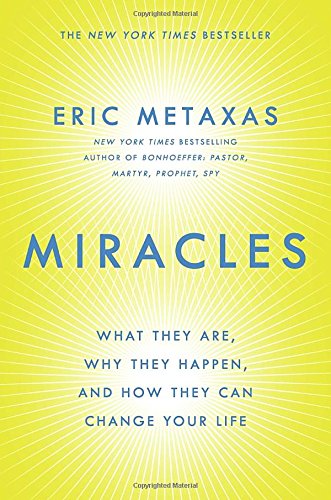 What are miracles, and why do so many people believe in them? What do they tell us about ourselves? And what do we do with experiences that we cannot explain?

In Miracles, Eric Metaxas offers compelling — sometimes electrifying — evidence that there’s something real to be reckoned with, whatever one has thought of the topic before. Miracles is also a timely, thoughtful, and civil answer to the books of the “New Atheists” — Richard Dawkins, Christopher Hitchens, and Sam Harris — who have passionately asserted not just the impossibility of miracles and the supernatural, but the outright harmfulness of belief in them.

Metaxas — whom ABC News has called a “witty ambassador for faith” — provides the measured and wide-ranging treatment the subject deserves, from serious discussion of the compatibility between faith and science to astonishing but well-documented stories of actual miracles from people he knows.

A more current, anecdotal, and personal version of C. S. Lewis’s 1947 book on the subject, Miracles is a powerfully winsome challenge that miracles are not only possible but are far more widespread than most of us ever might have imagined.