No, They Can’t: Why Government Fails-But Individuals Succeed 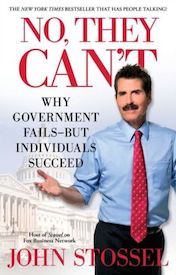 John Stossel was for many years a great oddity: an openly right-of-center broadcast-TV journalist. Now he’s something less rare: a right-of-center host on a Fox cable network.

But if there’s one thing that hasn’t changed, it’s his fierce dedication to libertarian principles. In his latest book, “No, They Can’t: Why Government Fails – But Individuals Succeed,” Mr. Stossel argues that in almost every case, we’re better off handling things ourselves, without intervention from the state.

As an introduction to a way of looking at the world, “No, They Can’t” is superb. In about 300 highly readable pages, Mr. Stossel whips through countless topics, explaining for each why libertarians think the government does more harm than good. It’s clearly intended to bring libertarian thought to people who haven’t really encountered it before: Every few pages, he includes a section divider explaining “What intuition tempts us to believe” (e.g. “Drugs cause crime”) and “What reality taught me” (“The drug war causes the crime”).

For those who already are libertarians, of course, the skeptical-of-government stance already is the intuitive one – and frankly, none of the viewpoints expressed here will be new.

Nevertheless, this is generally a comprehensive index of libertarian policy positions and their rationales as of 2012. Mr. Stossel covers it all: why American health care would be better if we unleashed the free market (and why it’s not a free market now), why the “food police” should disband, why we shouldn’t censor “hate speech,” why the drug war should end, why environmentalists should take it down a notch and even why we need to make serious reforms to our entitlement programs.

Unfortunately, comprehensiveness and rigor are competing qualities in a book of this length, and “No, They Can’t” sacrifices the latter. While each chapter is peppered with various facts, studies and anecdotes – with many of the anecdotes drawn from the segments Mr. Stossel has produced on TV – Mr. Stossel makes little attempt to consider contradictory evidence or really dig into the data.

For this reason, those who have thought through the issues and already are committed liberals – or on a topic like drugs, traditional conservatives – won’t find any new arguments to change their minds. Even libertarians might find his overexuberance on a few issues rather exhausting. He claims that if government would only get out of the way, “the future could be one so rich – so filled with technology and wonders – that my grandchildren would need to read about poverty to know what it was.”

He also manages to get quite excited about charter schools despite conceding that a “gold standard” study found “no significant difference in test scores” between children who attend them and those who don’t.

To his great credit, Mr. Stossel broaches a few topics that most libertarians would rather not talk about. He argues that private businesses should be allowed to discriminate against pregnant women and even against racial minorities. Unfortunately, a book like “No, They Can’t” is not a particularly good place to have such a discussion. As he does on the other topics, Mr. Stossel offers only quick justification for his belief: He claims that businesses that discriminate irrationally will lose out to their competitors, and he defends the basic right of freedom of contract.

He doesn’t consider the idea that even “rational” discrimination might be problematic – it might make business sense to discriminate against a job applicant from a group that lags behind in skills, even if that applicant has the same credentials as his competitors, but that doesn’t make it right. He also doesn’t confront the studies showing that even with civil rights laws, many employers – particularly in the low-wage market – do, in fact, treat blacks and whites with the same credentials differently.

(For a much more detailed argument that racial discrimination in hiring should be legal, see economist Walter E. Williams’ book “Race and Economics” or Richard Epstein’s “Forbidden Grounds: The Cast Against Employment Discrimination Laws.”)

“No, They Can’t” also gives readers a glimpse into the author’s personal and professional life. We how Mr. Stossel overcame a stutter to become a prominent television journalist and how his ABC colleagues reacted as he abandoned his former liberal beliefs in favor of a small-government philosophy. “When Peter Jennings saw me in the hall, he abruptly turned the other way. Others rolled their eyes,” he writes.

“Politically hostile lawyers combed through my scripts, demanding extra documentation if I said something positive about markets, asking me to ‘take this out’ or ‘tone that down.’ ” This isn’t a book about liberal media bias, but it’s hard not to be struck by the way Mr. Stossel was treated.

Again, readers looking for detailed, rigorous policy analysis won’t find it in “No, They Can’t.” But this is a perfect gift for a libertarian to give a friend or family member who has liberal instincts, so long as those instincts are accompanied by an open mind.

Book Review from The Washington Times, by Robert VerBruggen