Conservative Book Club » Biographies & Memoirs » Give Me a Break

Give Me a Break 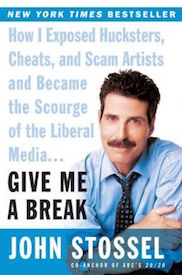 For thirty years now, 20/20 co-anchor John Stossel has unmasked hordes of snake-oil peddlers, rip-off artists, and corporate thieves. Even more importantly, he has courageously gone against the grain of the liberal media by proving that the free market makes life better. In “Give Me A Break: How I Exposed Hucksters, Cheats, and Scam Artists and Became the Scourge of the Liberal Media,” he does it again. Taking on such sacred cows as the FDA, feminists, and scaremongering environmental activists, he shows how the problems that government tries and fails to fix can be solved better by the extraordinary power of the free market.

Although he touches on numerous contemporary issues (including junk science, welfare reform, big government, tort reform, and life and free speech issues), the story Stossel tells is a deeply personal account of how, as he rose to the top of the television news industry, his passionate commitment to truth led him increasingly to oppose the big government nanny state that tries to choke off all individual initiative. The more he did, the more he drew the wrath of his liberal colleagues; he quips: “I was once a heroic consumer reporter; now I’m a threat to journalism.”

Some of John Stossel’s adventures:

“There’s nothing matter-of-fact about John Stossel’s fact-finding. He seeks the truths that destroy truisms, wields reason against all that’s unreasonable and uses and upholds the ideals that puncture sanctimonious idealism. He loves liberty in a way that goes far beyond liberalism. He makes the maddening mad. And Stossel’s tales of the outrageous are outrageously amusing.” —P.J. O’ROURKE

“John Stossel is one of the most tenacious, insightful reporters of all time, a true forerunner in investigative journalism.” —SEAN HANNITY

“Rips the covers off medical myths, bogus lawsuits and wasteful government spending. The powerful will not be happy with this book – but you will be.” — BILL O’REILLY

“Stossel is that rare creature, a TV commentator who understands economics, in all its subtlety. Read this fascinating book to learn — by example after example — how the indirect, unseen, effects of government policies often dominate the direct, seen, effects. Again and again, policies have effects the opposite of those intended.” —MILTON FRIEDMAN

“Stossel is a breath of fresh air in a world of stodgy, conformist, knee-jerk journalism.” —BERNARD GOLDBERG

Tags: Give Me a Break, John Stossel