Conservative Book Club » Bestsellers » One Man Against the World: The Tragedy of Richard Nixon

One Man Against the World: The Tragedy of Richard Nixon 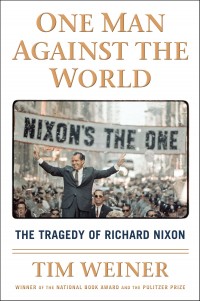 President Richard Nixon’s legacy has been the subject of speculation and controversy for years.. Between the war in Vietnam, tension with the Soviets, and the Watergate scandal, truth and reality have been distorted so often that it’s still difficult to discern what really happened behind the closed doors of Nixon’s administration. These issues are covered extensively in Tim Weiner’s One Man Against The World: The Tragedy of Richard Nixon.

Weiner excels at masterfully recounting the presidency of a complicated and manipulative man whose image in the public eye was constantly shifting. He works to portray all sides of Richard Nixon, taking the reader on an emotional roller-coaster — one moment beaming with pride at his dedication and patriotism, the next shaking their heads or rolling their eyes at his complete disregard for the Constitution.

With the recent release of previously secret White House documents, Weiner unearths the day-to-day dealings of Richard Nixon and his aides. He paints the portrait of a man consumed by paranoia and ruthlessness in the pursuit of victory. According to Weiner, Nixon had little regard for domestic problems, but at least understood the importance of public opinion. As a result, appearance became the main factor influencing every decision. He cared about his country, but he cared about legacy even more – even going so far as to sabotage President Johnson’s Vietnam peace summit in Paris so that Nixon could be the one to bring peace to Vietnam.

This charade of appearances carries into all areas of Nixon’s presidency, which Weiner tracks with painstaking detail. The book is riddled with Nixon’s personality and charisma, as he deals with the many shortcomings of the war in Vietnam, the multiple corrupted plots against his political opponents, and the hasty cover-up of the break-in at the Watergate hotel.

Readers will be pleased to find that even a person with little exposure to the Nixon presidency will be able to find Weiner’s narrative easy to follow and entertaining. With the number of scandals and secrets in Nixon’s administration, the book reads something like a soap opera with a “smoking gun” waiting with every turned page. While the inexperienced reader may stay afloat in this epic re-telling, readers could still find themselves disappointed in Weiner’s ultimate portrayal of the multi-faceted Nixon.

By the end of the book, Weiner unapologetically casts Nixon as something of a martyr whose Presidency died as a result of inconvenient laws. While it may have been true that Nixon was the only candidate strong enough to handle the challenges in American foreign policy in the late 1960s and early 70s, it does not excuse his unwillingness to be honest with America, Congress, or even himself. His lack of respect for the Constitution and famous claim on executive privilege show his true colors.

While Wiener perhaps was a little too forgiving of Nixon’s missteps, there can be no doubting his relentless pursuit of commentary, interviews, and research to finally bring accuracy to the narrative of the Nixon administration.

Tags: One Man Against the World, Richard Nixon