Panic on the Pacific: How America Prepared for the West Coast Invasion 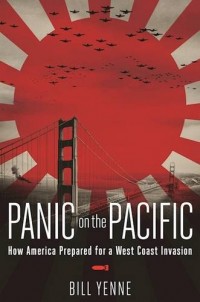 Panic on the Pacific recounts the anxious period following the Pearl Harbor attack on December 7, 1941, during which the West Coast of the United States lived in persistent fear of an imminent mainland invasion of the Japanese.  Such an attack never materialized, but there was always the possibility of invasion. This led civil and military leaders on the Pacific Coast to take measures to protect their communities and keep the people vigilant, including city blackouts. At sea, engagements between the Japanese and the Americans were carried out until the American upper hand was secured by the Aleutian Campaign, Guadalcanal, and Midway.

Bill Yenne is an experienced author on history, aviation and the military, with more than three dozen books under his belt. He also has a connection the history of WWII, his father having participated in the Pacific war effort as a welding foreman. Yenne has a way of making military history interesting and digestible to the average reader.  His lean, trenchant prose is engaging.  The book moves deftly between the war theater, the political response, and the effects that blackouts and other disruptions had on the everyday life of Americans.  Yenne has a particular talent for blending personal stories and anecdotes into his broader narrative.

One of the more colorful side stories of the book concerns the army’s recruiting of Hollywood into the war effort through the “camouflaging” of aircraft factories.  Hollywood set designers built “dummy” houses, cars and fields on the site of the factories so as to disguise them from enemy planes flying overhead.  Hollywood also contributed firearms from its stock of movie props to serve the needs of American soldiers.

The book is organized in three large sections; the last of these—entitled “What Might Have Been”— is an interesting exercise in alternate history as Yenne considers what might have happened if the Japanese had invaded.  He outlines hypothetical battles, such as the “Battle of San Francisco” and the “Battle of San Diego,” and calculates the outcomes according to such factors as the accessibility of ports of entry and the relative numbers of men involved.  Ultimately, Yenne concludes that the will and spirit of the American people would have carried the day, and that the invaders would not have succeeded in making the West Coast of the United States a colony of Japan.

The central figure of the book is Lieutenant General John Lesesne DeWitt, leader of the Western Defense Command and the “single most important man on the Pacific Coast,” although he is little known today.  In Yenne’s telling DeWitt was authoritarian, a purveyor of alarmist rhetoric, and a strident advocate for the internment of Japanese-Americans.  DeWitt worked closely with other West Coast civil and military leaders (including the governors and big-city mayors) to ensure preparedness for a Japanese invasion.  All these persons, and more besides, figure in the book’s varied cast of characters.  Particularly noteworthy is the way Yenne spotlights the Japanese point of view and explains the historical factors that led to Japan’s aggression.

Naturally, the book puts a special emphasis on the plight of the Japanese-American community during the period.  Although nearly three quarters of them were American born and most were loyal to the United States, panic about a possible Japanese “fifth column” of traitors was so strong that President Roosevelt signed a law authorizing internment.  Yenne recounts how the exodus of Japanese-Americans, many of whom were valuable to California as farmers and laborers, did damage to the state’s infrastructure.

The book’s overall presentation is handsome, but the editing leaves something to be desired; I spotted numerous errors, including including typos and missing words.  For a writer of Yenne’s standing to write that a submarine campaign “reached its crescendo” is unfortunate.  Still, these are relatively minor matters that can be ironed out in subsequent editions.  The book includes a bibliography, a list of military acronyms, and an outline of the hierarchical organization of the U.S. Army during the period.

As we approach the 75th anniversary of Pearl Harbor, this book is all the more timely; yet it is a timeless tale.  The compelling subject, combined with Yenne’s well-crafted writing, makes it a pleasurable read for history and military buffs.