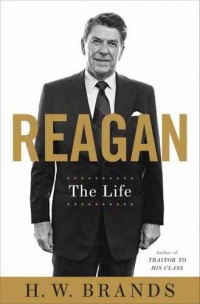 H.W. Brands, a historian and author of superb presidential biographies, especially Andrew Jackson, misses the mark with Reagan: The Life. While the book offers some new information, especially in regards to family conflict during his presidential campaigns, it’s more notable for what’s left out. It offers little information on Ronald Reagan’s progression to conservative thought, his historic and insurgent 1976 campaign for the presidency, and the role of his faith in politics.

Working against Brands is Reagan biographer Lou Cannon, who in covering Reagan’s entire political career as a journalist, already provided what Brands offers in Reagan: The Life. Brands’ biography, while comprehensive in Reagan’s life, is largely an insider’s account of Reagan’s presidency. Cannon, who authored Ronald Reagan: The Role of a Lifetime, delivers a much more thorough, readable, and supposedly non-partisan account of the 40th president’s time in office. Reagan biographers like Craig Shirley and Peter Schweizer, conservatives themselves, offer a much richer understanding of Reagan’s identity and ideology.

Where Brands succeeds at times is explaining the success of Reagan’s pragmatic conservativism and how Reagan’s exceptional communication instincts and skills was a boon not just for Reagan’s political career, but American conservatism. He even deftly points out Reagan’s decision to pursue radio as an audience over television after his two terms as governor of California, a decision that paid huge dividends of the national audience he reached. “Reagan was the most compelling communicator in American politics since Franklin Roosevelt, and he knew it,” declares Brands.

In terms of Reagan’s pragmatic approach, Brands believes Reagan “never wholly mastered the partisan-set: the psychological frame that puts the interest of the party ahead of that of the country.”

Furthermore, Brands praises Reagan for the powerful imagery he utilized against the Soviets, earning him the moniker “The Great Liberator” for freeing millions of slaves from their communist slave masters. “Reagan credibly reiterated America’s claim to the moral high ground vis-à-vis the Soviets, benefiting himself politically and America in the eyes of the part of the world he cared about,” says Brands. He goes on to say Reagan “believed what Americans have always wanted to believe about their country, and he made them believe it too.”

What’s missing from Brands’ account is the profound spiritual depth of Reagan in events like his historic Westminster Speech to the British Parliament in 1982, which struck a lethal blow against the spiritually hollow core of communism. Absent from the account are important points made by Reagan biographer and Grove City professor, Paul Kengor, about the deeply religious nature of Reagan’s trip to Moscow. Reagan went out of his way to speak to the Russian people about faith in God and the religious nature of liberty. Too much of this goes entirely unmentioned by Brands.

Brands affirms Reagan as the greatest President since Franklin Delano Roosevelt and concedes he is perhaps greater given that he often had a hostile Congress to contend with. However, this is hardly debatable anymore.

Ultimately, Brands’ biography, while comprehensive and valuable, falls short because he dismisses the deeper ideas of Reagan’s conservatism, preferring instead to attribute much of his success to mere ambition and good timing. If one is looking for an insider’s account of conflict and political strategy within the Reagan White House, this is an adequate account of Reagan. However, if one is looking for a deeper understanding of Reagan’s conservatism and ideals, one will not find it in Reagan: The Life.

Ray Nothstine, a contributor to the Acton Institute and the Christian Post, lives in Jackson, Miss.  Edited by Caitlyn Reuss.