Reviving America: How Repealing Obamacare, Replacing the Tax Code and Reforming The Fed will Restore Hope and Prosperity 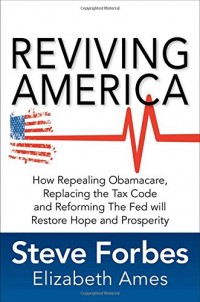 The United States has been through one of the most tumultuous decades in recent history. Polls show people on both sides of the ideological divide believe that the country has gone off track.  If something isn’t done quickly, Americans face a bleak future―continuing decline and disarray in a world that grows ever more dangerous.

Steve Forbes, two-time candidate for the GOP presidential nomination and Forbes Media Chairman, explains how today’s malaise has been caused by years of Obama’s destructive policies, a broken tax system, and the Federal Reserve’s Soviet-style controls over credit and money.

The problems are challenging. But Forbes tells us that, with the right policies, the country can bounce back faster than people think. In this compelling and much-needed book, he sets forth a three-part plan to revive America.

A clear and vital guide, Reviving America shows how the United States can recover the optimism and entrepreneurial dynamism that made it the greatest nation in history. These are 21st century solutions―not the failed ideas of the recent past. Forbes offers specific ideas and plans, not generalities and bromides, and is challenging policy makers to do the same.