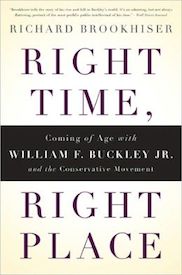 Richard Brookhiser was only fourteen when he wrote his first cover story for National Review — and only twenty- three when he became the magazine’s youngest senior editor. A star-struck admirer and protege of the magazine’s founder, William F. Buckley Jr., Brookhiser was soon tapped by Buckley himself to succeed him as editor-in-chief. But somehow the relationship soured — and one day Brookhiser found a note on his desk dryly informing him “you will no longer be my successor.” Yet despite this crushing disappointment, Brookhiser stayed on at National Review and remained friends with Buckley until the great man’s death.

Now, in “Right Time, Right Place: Coming of Age with William F. Buckley, Jr. and the Conservative Movement,” Brookhiser tells the story of that friendship — and of the remarkable conservative resurgence that Buckley nurtured and led. “When I met Bill Buckley, there were still Soviet troops in Berlin,” writes Brookhiser. “Ten years later, they were in Afghanistan. Ten years after that, the Berlin Wall collapsed. Twelve years after that, the World Trade Towers collapsed.

The conservative movement helped elect presidents, from Richard Nixon to Ronald Reagan to George W. Bush. Like a typhoon, the turn of the millennium threw amazing sea creatures on the beach: prophets (Aleksandr Solzhenitsyn), freaks (Monica Lewinsky), monsters (Pol Pot). Working for Bill Buckley at National Review, I covered these and many other figures and events. I shook Castro’s hand; Reagan laughed at one of my jokes, and Margaret Thatcher repeated it. One of my friends got anthrax after 9/11. You had to be interested in history from 1969 to 2008; to borrow a line from Christopher Hitchens, it was interested in you.”

“A Galloping Good Read” “A stirring and enormously readable account that provides a valuable reminder of the ability of a single individual to bend the course of history and alter, forever, a nation’s thinking.” — Michael Medved, talk radio host and author of The 10 Big Lies About America

“Richard Brookhiser has written a wonderful memoir that is a personal history of National Review and of contemporary conservatism — unabashedly honest, deeply wise, and analytically acute. Brookhiser is the prose equivalent of a fine jeweler. With his lapidary style and dazzling metaphors and erudition, he’s always a marvel to read.” —Rich Lowry, editor of National Review

“Right Time, Right Place” is a galloping good read — an honest, fast-paced, revealing memoir by one of the conservative movement’s best writers. William F. Buckley emerges as a real human being, warts and all, and not just the Conservative Saint. Of course, Buckley is that, too, but he’s more rounded in this book than in any other I have read.” — Lou Cannon, co-author of Reagan’s Disciple: George W. Bush’s Troubled Quest for a Presidential Legacy

“I thought I knew Bill Buckley. Now I know better — a lot better. But Right Time, Right Place is more than just a poignant, startlingly frank memoir of a remarkable man. It is also a portrait of a pivotal moment in American political and intellectual life, seen through the eyes of a gifted writer who saw it all happen and knew what he was seeing. Anyone who wants to understand how and why the conservative movement changed America will have to reckon with this book.” — Terry Teachout, drama critic of The Wall Street Journal