What Would the Founders Do? Our Questions, Their Answers 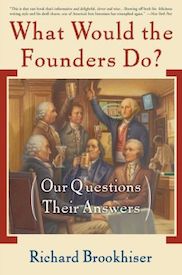 If the Founding Fathers were alive today, what would they do about terrorism? What would they say about public expressions of religion? Would they be for or against gun control? The death penalty? “Gay rights”? Now, in “What Would the Founders Do? Our Questions, Their Answers,” acclaimed author and National Review senior editor Richard Brookhiser examines the founders’ own words in their historical context to theorize what they would think of today’s most controversial and important issues.

“Americans have been asking what the founders would do since the founders died,” writes Brookhiser, author of several bestelling biographies of the founders. “Their specialness comes from being human creators of a human thing, America. We, their successor Americans, feel simultaneously awed by them and like them. They built the country, they wrote the user’s manuals — Declaration, Constitution, Federalist Papers — and then ran it while it could still be returned to the manufacturer. We assume that if anyone knows how the U.S.A. should work, it must be them. In that spirit, we ask WWFD – What Would the Founders Do?”

Revealed: what the Founders would do (and say) about:

Written with Brookhiser’s trademark eloquence–and a good dose of wit — while drawing on his deep knowledge of American history, What Would the Founders Do? sheds new light on the disagreements and debates that have shaped our country from the beginning. Brookhiser challenges us to think and act with the clarity that the Founders brought to the task of building our Republic. Now, more than ever, we need these creators of America — combative, funny know-it-alls — to help us solve the problems that confront us.

“This is a stunning achievement. Few people know the Founders well enough and contemporary issues well enough to have put together such a book, and even fewer have Brookhiser’s skill at telling the story in so fascinating a way.” —Forrest McDonald, author of The American Presidency and Alexander Hamilton

“Richard Brookhiser has undertaken a daunting task — addressing the questions and concerns of twenty-first-century Americans to our eighteenth-century founding fathers. Brookhiser applies the principles and practices of the founders to the problems of our time, and he does so in his usual elegant and witty manner. In so doing he reminds us of the wisdom of the founders, but more importantly, he reminds us of the enduring nature of the fundamental problems confronting a free society.” —Stephen Knott, author of Alexander Hamilton and the Persistence of Myth

“What a great piece of work it is! Lively throughout, full of relaxed authority, and with what I really think might be the most stirring final paragraph written by an American since The Great Gatsby.” —Richard Snow, editor, American Heritage

Tags: Richard Brookhiser, What Would the Founders Do?