Conservative Book Club » Philosophy & Political Theory » Saving the Republic: The Fate of Freedom in the Age of the Administrative State

Saving the Republic: The Fate of Freedom in the Age of the Administrative State 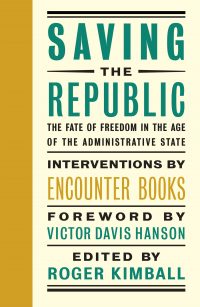 America is embroiled in ideological conflict, with the opposing partisan bulwarks of the Left and the Right widening a chasm that threatens the unity of our Republic. The tumult in Washington has radiated into our universities, homes, and relationships ― from constitutional threats; to the imposition on free speech; to a sprawling, unelected administrative state, America is at a tipping point.

Fortunately, Encounter’s Broadside and Intelligence series offer indispensable ammunition for intelligent debate on these critical issues of our time. With a staunch allegiance to the truth, these timely essays resurrect 18th-century pamphleteering to take on everything from the failures of the redistribution of wealth, to the twisting of Title IX, to the dangers of the increasingly unchecked media bias. Saving the Republic, a collection of Encounter interventions, is a necessary resource of critical thought and commonsense on how to safeguard the promise of America.

Saving the Republic is edited by Roger Kimball with contributions from Jay Cost, Philip Hamburger, Mollie Ziegler Hemingway, David B. Kopel, Greg Lukianoff, Andrew C. McCarthy, Jared Meyer, James Piereson, Claudia Rosett, Avik Roy, Robert L. Shibley, Michael Walsh, and Kevin D. Williamson. Together these authors make the definitive case for liberty and democratic capitalism at a time when they are under siege from the resurgence of collectivist sentiment.

Tags: Roger Kimball, Saving the Republic: The Fate of Freedom in the Age of the Administrative State