Sex Scandal: The Drive to Abolish Male and Female 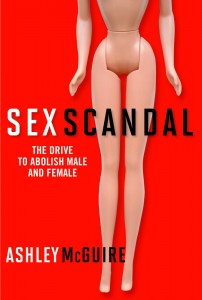 But now, contrary to all science and common sense, we’re supposed to believe that there is no difference. (And if you insist there is, you just might be accused of a hate crime!)

Our culture—and our laws—are endorsing a worldview rooted in craziness.
For instance, we’re told that:

If you think that’s insanity, you’re not alone, but you might be surprised at just how widespread—and successful—this lunatic campaign has become.In her compelling new book, Sex Scandal, journalist Ashley McGuire takes this radical campaign to task and reveals:

Sex Scandal: The Drive to Abolish Male and Female is packed with news-breaking interviews, shocking examples, and “inconvenient” facts that everyone needs to read—and act on.