The Conscience of a Conservative 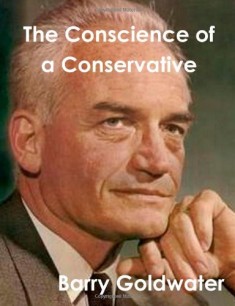 Barry Goldwater’s little 115-page book, “The Conscience of a Conservative,” was published in 1960, long before running for president had occurred to the senator from Arizona, or much of anybody else. But Goldwater was already the undisputed champion of conservative ideas and policies in the Senate, and had traveled thousands of miles making speeches, campaigning for aspiring congressmen and senators, and raising money for the Republican cause. In the process he had developed an understandable and clear position on conservatism and a degree of popularity among right-wing Americans. He also knew that the literature available to conservatives lacked a concise and unadulterated statement of conservative principles.

Ghostwritten by L. Brent Bozell — a senior editor at National Review, William F. Buckley Jr.’s brother-in-law and co-author of “McCarthy and His Enemies” (1954) — it took the ideas that were, at the time, mostly discussed only by a few conservative intellectuals and presented them in a way that made them accessible to a more popular audience and laid out what conservatives believed and what their plan of action should be.

Bozell had been writing speeches for Goldwater, had a good grasp of the issues that Goldwater believed in, and was a first-class writer and thinker. He and Buckley had been debate partners and the U.S. debate champions at Yale, and if anybody in the nascent conservative movement knew how to frame an argument, it was Bozell. It is unclear whether the book was Goldwater’s idea or Bozell’s, but when Bozell finished the manuscript and presented it to Goldwater, it is said that Barry thumbed through it for 10 minutes or so, handed it back and told Bozell to go with it.

The book spelled out the conservative position on limited government, civil rights, government regulation, taxes and spending, the welfare state, education and the Soviet menace. In doing so, Goldwater brought the three conservative branches into a coordinated and seamless tract — a “fusion” that ended the three-way debate over reconciling conservative ideals and practical politics that had raged for 15 years. As Goldwater said in his introduction, he wished “to bridge the gap between theory and practice.” He took the ideas that established the roots of conservatism — economics, anti-communism, limited government, the Constitution — and explained how they could be applied to practical politics and government policy. The “challenge to conservatives today,” he said, “is quite simply to demonstrate the bearing of a proven philosophy on the problems of our own time.”

The result was an astonishing success. “The Conscience of a Conservative” became, quite simply, the conservatives’ new bible, the “underground book of the times,” as Goldwater described it 30 years later. The first printing, a small hardback, was 10,000 copies, which the publisher sold to bookstores for $1 each. Within a month, it ranked 10th on Time magazine’s best-seller list, and two weeks later ranked 14th on The New York Times’ list. By the time the 1960 election came along, just five months later, 500,000 copies were in print. The Wall Street Journal reported that it was selling best in college bookstores, comparably to the perennial best-seller “The Catcher in the Rye.” Eventually over 4 million copies would be printed; “The Conscience of a Conservative” became the political book of the century, probably with a greater impact than any political book since “The Communist Manifesto.” It is no exaggeration to say that “The Conscience of a Conservative” changed American conservatism from an abstract set of ideas into a practical political philosophy and, in the process, established Barry Goldwater as its most prominent spokesmen, which he would remain until the emergence of Ronald Reagan. The book probably was also responsible for recruiting more people to the conservative cause than anything else. Typical was the impact it had on Paul Laxalt who, in 1960, was practicing law in Carson City, Nevada. “One of my clients sent me a copy of ‘Conscience of a Conservative,'” said Mr. Laxalt, “and, God, I found it absolutely fabulous. There wasn’t anything around like that. And I just feasted on it.”

Mr. Laxalt told me the distribution of the book “to young people like myself, a young lawyer who had run for office one time before was significant as hell. It was our bible.” Mr. Laxalt, who was elected lieutenant governor of Nevada in 1962, was the first elected official to endorse Goldwater.

Regnery Publishing released a 33-year anniversary edition in 1990 with a new introduction by Pat Buchanan. “Into that winter of our discontent came this slim book ,” wrote Mr. Buchanan. “[It] was our new testament; it contained the core beliefs of our political faith, it told us why we had failed, what we must do. We read it, memorized it, and quoted it. To reread it today is to recall the magic the charismatic man from the desert had for so many thousands in that Silent Generation.”

“The Conscience of a Conservative” remains in print 54 years later, and is as timely as it was in 1990 and 1960. Over the years, it changed a generation, changed the conservative movement and changed American politics forever.

Book Review from The Washington Times, by Alfred Regnery

Tags: Barry Goldwater, The Conscience of a Conservative