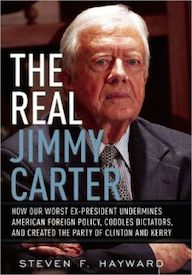 The Nobel Prize is just the beginning: Jimmy Carter is enjoying a new day in the sun, with left-wing historians taking a “fresh look” at his disastrous presidency and trying to bamboozle Americans into thinking that it was actually successful. This ongoing Saint Jimmy campaign would be laughable if it weren’t part of a larger strategy to whitewash the records of failed Democrats and justify Carter’s outsize influence on today’s Democratic party. Although the voters decisively dispatched Jimmy Carter in 1980, his legacy lives on in potent form today and is likely to survive his death. But now in “The Real Jimmy Carter,”Steven F. Hayward demolishes the Carter myth once and for all.

Hayward knows a real leader when he sees one (he’s the author of The Age of Reagan, 1964-1980 and Churchill on Leadership) and in this book he provides a wealth of devastating new information that proves that Carter was and is one of the worst American leaders in history. He explains why Carter’s presidency really was as bad as we thought at the time, or worse. Turning to today, he details how Carter’s lasting and dominant impact on the Democratic Party — the party of John Kerry and Hillary Clinton — has been calamitous, and why his supposed status as a “model” ex-president is the reverse of the truth (unless your idea of a model statesman is Jesse Jackson). Steven F. Hayward reveals:

How Carter’s political persona amounts to little more than an odd combination of Machiavelli and Mr. Rogers

Carter as a politician: his habits of exaggeration, disingenuousness, and outright deception — belying his claim to occupy the moral high ground

Carter’s weak, vacillating position on school desegregation as a member of a Georgia school board in the 1950s

Carter’s 1970 run for Georgia governor: after conducting an appallingly cynical race-baiting campaign, he immediately proclaimed that the time had come for the South to repudiate its racist ways

Jimmy’s loopy side: who’s the only person elected to the presidency to have filed a UFO-sighting report with the Air Force? You guessed it

How, despite claiming to be “above politics,” Carter used the traditional weapons of power as Governor: patronage appointments, attempts to maneuver his supporters into key legislative posts, and more

False: Carter’s claim, made during his 1976 presidential run, that he was a nuclear physicist

Abortion: how Carter’s 1976 position on this issue vividly displayed his ability to stand on both sides of an issue

How Carter’s 1976 election as president was not a fluke of the post-Watergate moment, but the fruit of his own carefully planned five-year effort

Carter: born again? Disquieting evidence that he was not as much “one of us” as evangelical Christians assumed in 1976

The Camp David accords: why Anwar Sadat exclaimed, “I’d just spent two years throwing the Soviets out of the Middle East, and now the United States is inviting them back in”

Inside the Carter White House during the disasters of the Sandinista takeover of Nicaragua, the energy crisis and the Khomeini Revolution and hostage crisis in Iran

The “malaise speech”: why Carter made it, and the effect it had on his failed presidency

Global 2000: the doom-and-gloom study that Carter released shortly before leaving the presidency — how most of its predictions have turned out to be wildly wrong

Revealed: the shocking extent of Carter’s clandestine efforts to sabotage the first Gulf War in 1990

The Clinton Administration: how it became Carter’s virtual second term, despite Slick Willie’s disdain for Carter

Carter’s Nobel Prize: how a Nobel official inadvertently revealed that it was actually meant as a slap in the face of the American people

Carter the meddling ex-president: how, in the words of Time magazine’s Lance Morrow, some of his “Lone Ranger work has taken him dangerously close to the neighborhood of what we used to call treason”

Bank robber Willie Sutton’s assessment of Carter: “I’ve never seen a bigger confidence man in my life, and I’ve been around some of the best in the business”

Steven Hayward demonstrates again and again that Jimmy Carter’s failures weren’t just accidents of history. They’re rooted in the character and ideology of the man himself. This wouldn’t concern anyone except Rosalynn and Amy if it weren’t for the fact that Carter continues to insert himself in the nation’s business, both at home and around the world. But The Real Jimmy Carter proves that the Emperor from Plains has no clothes — and never has.