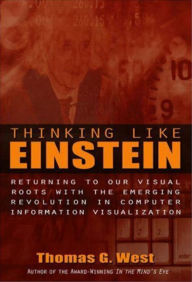 Albert Einstein once said that all of his most important and productive thinking was done by playing with images in his imagination. Only in a secondary stage did he translate — with great effort, he says — these images into the language of words and mathematics that could be understood by others.

According to Thomas G. West, Einstein was a classic example of a strong visual thinker, a person who tends to think in images and visual patterns, and sometimes has difficulty with words and numbers. In his awarding-winning book, In the Mind’s Eye, West discussed the connections between highly talented, visually oriented persons like Einstein and certain learning disabilities such as dyslexia. Now, in Thinking Like Einstein, West investigates the new worlds of visual thinking, insight, and creativity made possible by computer graphics and information visualization technologies. He argues that, with the rapid spread of inexpensive and powerful computers, we are now at the beginning of a major transition, moving from an old world based mainly on words and numbers to a new world where high level work in all fields will eventually involve insights based on the display and manipulation of complex information using moving computer images.

West profiles several highly creative visual thinkers, such as James Clerk Maxwell, Nikola Tesla, and Richard Feynman, pointing out that there is a long history of using visualization rather than words or numbers to solve problems. Citing the longstanding historical conflicts between image lovers and image haters, West examines the relationship of art, scientific knowledge, and differences in brain capabilities – observing how modern visual thinkers with visualization technologies seem to have learned how to cut through the problems of overspecialization in academia and in the workplace.

West predicts that computer visualization technology will radically change the way we all work and think. For thousands of years the technology of writing and reading has tended to promote the dominance of the left hemisphere of the brain, with its linear processing of words and numbers. Now the spread of graphical computer technologies is permitting a return to our visual roots with a new balance between hemispheres and ways of thinking – presenting new opportunities for problem solving and big picture thinking. Thus, he argues that the newest technologies will help us to reaffirm some of our oldest capabilities, allowing us to see previously unseen patterns and to restore a balance in thought and action.