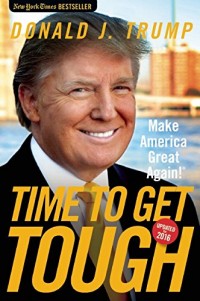 President Obama has been a disaster for America. In four short years, he’s wrecked our economy, saddled our children with more debt than America managed to rack up in 225 years, and gone around the world apologizing for our country—as if the greatest nation in the world needs to apologize for being a land of opportunity and freedom, which we were before Obama became president.

Now, America looks like a broken country—stripped of jobs, stripped of wealth, stripped of respect. And what does President Obama do about it? He plays nice with a China that is doing everything it can to destroy our economy, while refusing to stand up for America with Middle Eastern oil mobsters who think they can hold us hostage through higher prices at the pump, and chucking billions in “stimulus” money to his friends and supporters while letting the rest of us foot the bill.

This can’t go on. And if Donald J. Trump has anything to say about it, it won’t.

In his new blockbuster book, Time to Get Tough, Trump has the answers America has been looking for, an agenda for making America number one again, including:

Blunt, straightforward, and honest, it’s all trademark Trump, setting out a common sense agenda to restore American prosperity and make our nation respected once again.