Truth Overruled: The Future of Marriage and Religious Freedom 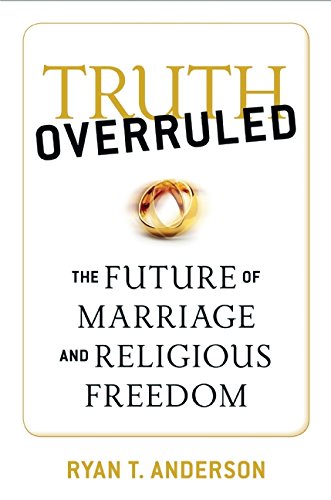 No matter how the Supreme Court rules in June, Americans face momentous debates about the nature of marriage and religious liberty. If the Court respects the authority of the people, the definition of marriage will be contested in each state. If the Court imposes same-sex marriage on the entire country, we will have to energetically protect our freedom to live according to our conscience and our faith as we work to rebuild a healthy marriage culture.

In the first book to respond to the Supreme Court’s decision on same-sex marriage, Ryan Anderson draws on the best philosophy and social science to explain what marriage is, why it matters for public policy, and the consequences of its legal redefinition.

Attacks on religious liberty–predicated on the bogus equation of opposition to same-sex marriage with racism–have already begun, and modest efforts in Indiana and other states to protect believers’ rights have met with hysterics from media and corporate elites. Anderson tells the stories of innocent citizens who have been coerced and penalized by the government and offers a strategy to protect the natural right of religious liberty.

Anderson reports on the latest research on same-sex parenting, filling it out with the testimony of children raised by gays and lesbians. He closes with a comprehensive roadmap on how to rebuild a culture of marriage, with work to be done by everyone.

The nation’s leading defender of marriage in the media and on university campuses, Ryan Anderson has produced the must-read manual on where to go from here. There are reasonable and compelling arguments for the truth about marriage, but too many of our neighbors haven’t heard them. Truth is never on “the wrong side of history,” but we have to make the case. We will decide which side of history we are on.