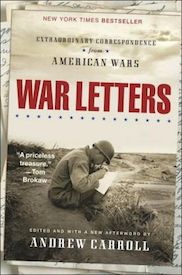 “War Letters” is an unforgettable collection of deeply personal letters from those who fought America’s wars — from the Civil War to Bosnia. These 200 letters give you riveting, previously unpublished accounts of Gettysburg, Meuse-Argonne, Pearl Harbor, D-Day, Khe Sanh, Desert Storm, Somalia, and more — all written as these world-changing events were unfolding.

Some of these letters have long been preserved as heirlooms. Others were rescued from attics, basements, and rummage sales. All have been painstakingly gathered by Andrew Carroll’s Legacy Project, an initiative designed to honor our veterans by seeking out and preserving their correspondence. In each of these letters, history comes alive as never before: soldiers move through the great battles of history, have encounters with great men and women, comfort their loved ones back home, receive and react to “Dear John” letters, and struggle with the horror and loneliness of war.

A revealing new sidelight on history – from common soldiers:

Plus new, personal revelations from some well-known figures:

I was resting peacefully in bed when I noticed rather more “practice fire” than I had heard before and then I realized that it was strange to be practicing on Sunday morning. . . . Then I saw the smoke from the several fires and saw the antiaircraft shells exploding. . . .

There was one big Jap bomber in the sky flying over Hickam Field and Fort Kamahamaha but no one seemed to be doing anything about it. One Jap plane was down in flames at the Hospital and it had fired the Laboratory and one of the quarters which fortunatley had been vacated because they were starting a big new dry dock. I met the Exec. at the door and he told me to go up and take charge of the Surgery. I hurried up to the Surgery and all ready the casualties were pouring in. I did the first operation on a casual in this war if that is anything.

I spent the next 72 hours in four hour shifts at the operating table. During my first shift we were under almost constant bombing and the A-A fire kept up a constant din. They didn’t actually hit the hospital but one explosion was so close it blew all the windows out of the work room which was right next to the room I was operating in. I thought my time had come for sure. It was hell for a while. Those poor devils brought in all shot up and burned. Many of them hopeless. We gave them plenty of morphine and sent them out in the Wards to die. The others we patched up as best we could. . . . It was all a nice party but personally I dont want to see any more like it.

I only hope the country will now take off their coats and go to work. We have the ability and skill but it is going to mean many sacrifices for all and a long hard pull.

“In the sweep of history, the experience of the lone soldier is often lost, but in this breathtaking collection the individual voices of the men and women who have served this nation come to life with a power and an eloquence that is both gripping and unforgettable. I can think of no better way to understand the horrors of war than to read the words of those who have been caught in its grasp, and these extraordinary letters offer some of the most dramatic eyewitness accounts of war imaginable. Quite simply, this is one of the greatest, most riveting books of war letters I have ever read.” – STEPHEN AMBROSE, author of The Good Fight and Citizen Soldiers